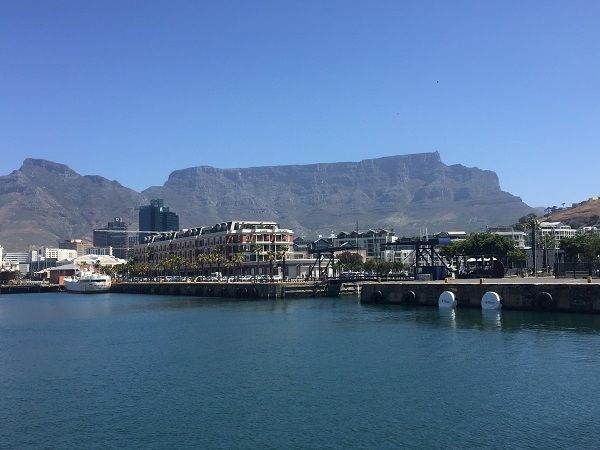 Cape Town: gateway to the winelands of South Africa

South Africa – a wine industry that’s 320-odd years old. Or 20-odd, depending on your point of view (OK, some poetic licence taken there – strictly 366 and 24 years…). Either way, its rapid pace of change is making waves.

Others, like regional expert Tim Atkin MW or local critic Cathy van Zyl MW, would give deeper perspectives of the country than I, but this is the view I’ve formed since visiting first in November 2015 (with the superb organisational help of Wines of South Africa), then again over Christmas two years later, talking to many winemakers along the way. 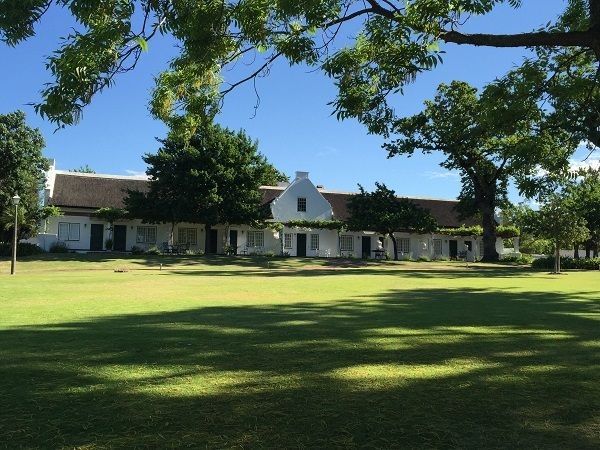 South Africa has a long wine history, captured in the Cape Dutch architecture of many wineries

After Dutch settlement, vines were established in places like Simon van der Stel’s Constantia estate on the east flank of Table Mountain, in the heart of the Western Cape. Winemaking flourished across the region.

The location of the region, by the Cape of Good Hope, on trading routes, coupled with the addition of Cape Colony to the British Empire, meant its wines were exported as well – especially as Sherry- and Port-style wines, fortified for the journey with locally-made brandy. The sweet white wine of Constantia was a favourite of Napoleon Bonaparte.

Though 19th century plagues of Phylloxera and mildew took their toll, and the industry had to adjust to the abolition of slavery, but wine continued to be made into and through the 20th century. But the isolation of South Africa on the world stage as a result of apartheid had different impacts on the industry, especially on quality.

The gradual domination of production by the near-monopoly of the KWV co-op not only reduced competition, but tended to depress innovation. Moreover, the industry looked inwards, with wines judged only against their South African peers. The definition of “good” became blinkered.

Fast-forward to the mid-1990s and the re-opening to international trade, with South African wines being compared with Global competition, and the degree of stagnation in quality and of under-investment became evident.

However, a new generation of winemakers was able to graduate from Stellenbosch and go to make wine around the world. Their progressive return with new techniques, technologies and ideas, coupled with substantial investment in vineyards and in wineries drove a rebirth.

Today, my view is that the pace of change in South Africa is perhaps faster than anywhere else in the wine world right now – faster even than new Chile, the Spanish renaissance or the recent resurgence of Australian winemaking.

The stereotype of South African wines is, or was, New World ripeness of fruit with Old World winemaking – i.e. robust and often rustic tannins in reds. That classical style has whites that are big and bold, often over 14% ABV and sometimes lacking freshness, with a whack of new oak. Reds are upwards of 15% ABV, often carrying a roasted or smoky tone and with jammy, baked fruit, plus those robust tannins underpinning it all.

These wines can still be widely found and it should be said that there are producers like Meerlust that deliver this bolder style well.

However, the new generation are bringing much greater finesse to both whites and reds, carrying freshness and extracting with more control to create polished, sophisticated wines that are pushing the quality bar to a high level.

Vineyard investment to replant virus-free stock, and eliminate leaf-roll virus and control its mealy bug vector, winery investment in temperature control and reductive winemaking, along with higher quality oak barrels have all contributed to this trend. This has, in-turn. driven the quality bar upward. Luxury brands like Vilafonté, the Rupert and Rothschild joint venture involving the Lafite Rothschilds, or Leeu Passant wines all reflect that drive.

Most excitingly, the late 2000s and 2010s have seen more winemakers rediscovering old vines, especially of once-derided Chenin Blanc and making tremendously characterful wines. This also extends to red and white Rhône varieties. They’re finding new winemaking zones too, like the Swartland or Hemel-in-Aarde, and looking to altitude for freshness.

The return to Chenin Blanc is fascinating to me. Studying South Africa in 2004 would mostly have mentioned signature varieties, Pinotage and Steen (Chenin’s local synonym). With Pinotage a ‘Marmite’ variety, this made Chenin the obvious candidate to become South Africa’s ‘signature’ variety, like Malbec had already become for Argentina, since South Africa is essentially the only place that grew it at any scale outside the Loire Valley.

Instead, there was a major drive to market and to plant…international varieties like Sauvignon Blanc, Chardonnay and Cabernet, thereby running straight into cheaper Chilean Sauvignon, better New Zealand Sauvignon, plus Chardonnays and Cabernets across the quality spectrum from a multitude of places.

The problem was that Steen was treated as a workhorse volume grape, often for brandy distillation, so people didn’t consider its quality potential. Thankfully, the likes of Eben Sadie, Adi Badenhorst and others in the Swartland took a different view, generating top-quality Chenins and Chenin blends, with Ken Forrester likewise long championing the variety in Stellenbosch. David and Nadia Sadie, the Alheits and others have since raised the quality Chenin flag too.

Alongside the (re)discovery of varietal heritage, some winemakers are exploring terroir more overtly. Perhaps most visible amongst these are Chris and Andrea Mullineux, whose soil-specific ranges are achieving premium prices. This is particularly true for their Syrah range: Granite, Schist and Iron, from 3 separate vineyard parcels but vinified in a similar way and showing distinctly different expression. Peter-Allen Finlayson has recently followed suit with a set of Syrah wines at his father-in-law’s Gabriëlskloof estate in the Bot River region. 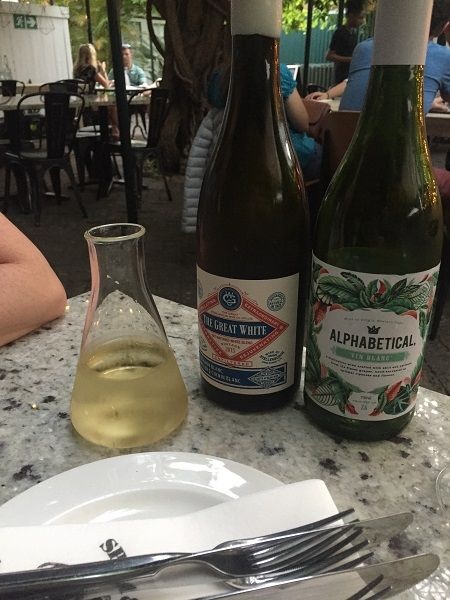 Of course, there is a solid chunk of hipster winemaking going on too – skin contact whites, low or no SO2 wines, amphorae, whole bunch red fermentations etc. These, as elsewhere have their hits and their misses but perhaps reflect the experimentation taking place in the country.

The major Theewaterskloof reservoir, reduced almost to its original river, by December 2017

Finally, there is a distinct drive for sustainability in both vineyards and wineries. That’s particularly true for water management after 3 consecutive drought vintages 2015-2017 almost drained reservoirs and led to acute water restrictions in Cape Town itself. Restrictions on irrigation caused some grape growers to lose 80% or more of their 2018 production.

Beyond organic viticulture, solar panel installation and gravity-fed new wineries, sustainability also extends into the economics of the community. Traditionally white-owned wineries like Meerlust are taking steps to involve black workers in a more meaningful way than just paid labour. Bringing the black community into the decisionmaking and ownership dimensions of the wine business is an important long-term trend. 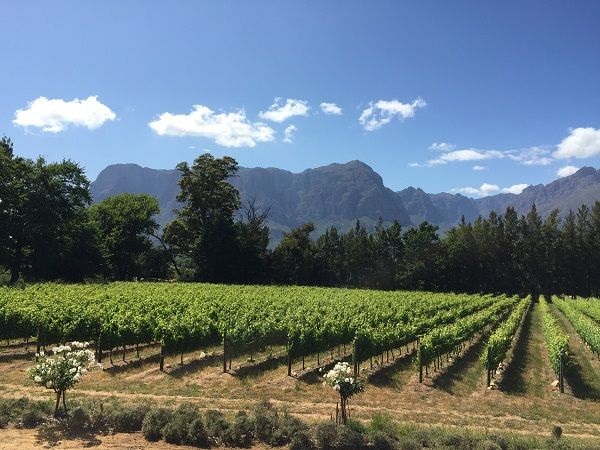 My view on what to look out for. Other varieties are of course grown, but…:

Again, other varieties are grown, but these are what catch my eye. I don’t include Merlot in this list; strangely it doesn’t seem to work particularly well in the country – as several winemakers also remarked. Though producers like Meerlust can produce decent efforts, it is not often made as a varietal wine and when done so, is typically uninspiring. Clonal material? Viticultural practice? Not sure… Anyway:

Beyond the rapidly advancing quality of the wines, the Cape Winelands are incredibly accessible for visitors – amateur and professional; individuals, tour parties and families. Stellenbosch is just 40 minutes from Cape Town airport; Constantia 25 minutes from Cape Town. Most wineries have tasting rooms, many wineries have great accommodation, restaurants or picnic areas. And the scenery is stunning. 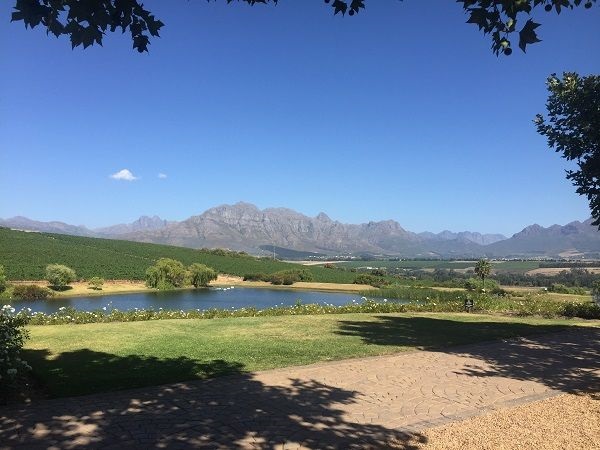 Classic beauty of the Cape Winelands, fringed with craggy mountains, under azure skies

South Africa is a very attractive place for wine lovers, in all senses and for all senses. Here are summaries of key regions, as I see them: