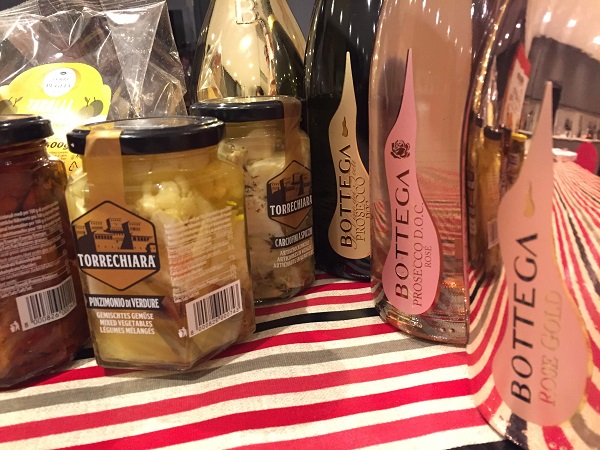 My first immersion in the wines of Bottega was in the Barbican Centre in 2019, where CEO, Sandro Bottega, introduced a vertical of their vintage-dated Prosecco Il Vino dei Poeti, to demonstrate that quality Prosecco can be age-worthy.

As I wrote up in more detail on JancisRobinson.com (for subscribers), the tasting showed that, contra to most beliefs, a Prosecco can have a 4- to 5-year drinking window – and indeed the 2017 was showing better than the newly-released 2018.

18 months and a coronavirus pandemic later, I was invited to join Sandro’s virtual presentation of 4 more wines, in particular their new Prosecco Rosé, though in fact the bottles arrived with a hamper full of deli antipasti, as Sandro’s main thrust was actually to demonstrate food-friendliness of Prosecco.

Before getting to the pair of rosés, it’s worth discussing the regular Proseccos. Il Vino dei Poeti 2019 is, nominally at least, the junior partner to the gold-bottled Bottega Gold NV (Bottega make the bottles themselves and have patented the metallisation process with aluminium). However, I felt the Poeti had some extra depth to it in the sense of a salinity or mineral quality, as well as a less overt sweetness to it. That said, ultimately the Gold had a greater aromatic intensity that remained longer in the glass; both are good Proseccos. 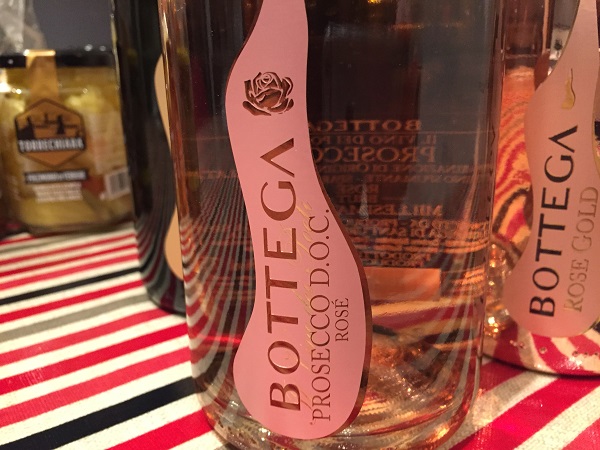 The rosés were the dimension of interest to me. Bottega Rose Gold, in a rose-gold bottle, equivalent to Bottega Gold, already existed – but was not a Prosecco, since rosé Prosecco was not then legal. With the advent, from the 2019 vintage, of Prosecco Rosé made predominantly with Glera but with up to 15% of Pinot Nero, I expected that Rose Gold would join Gold as Bottega’s lead Prosecco Rosé…

Not so: the Prosecco Rosé is a 2019 partner for Il Vino dei Poeti; Rose Gold remains as it was – a 100% Pinot Noir sparkling wine with grapes from Oltrepò Pavese. Tasting the two wines side-by-side, I can understand the debates Sandro explained that they had – whether to do the obvious and switch Rose Gold to a Prosecco, or retain what is actually a rather fine pink sparkler.

Rose Gold showed the vinosity of Pinot Noir with an abundance of red cherry fruit, unlike the Prosecco Rosé, whose flavours are much more of a Prosecco but with red apple rather than yellow apple & pear as main flavour. As such, it would have been a major change to switch it to a Prosecco Rosé, for consumers who already know Rose Gold as it is.

But this does potentially leave consumers in a state of confusion, with the assumption that Rose Gold would be a Prosecco, given Bottega’s strength in the category – they produce 16 million bottles of wine a year and the vast majority of that is Prosecco, with 130,000-odd 9L cases of their Prosecco being sold in travel retail alone. That won’t be helped by the decision that a Prosecco Rose Gold will also be made, in a metallised pink bottle, albeit a squatter one, with a sparkly capsule.

Confusion aside, both wines are pretty good, and it’s a credit to Sandro’s team that these are, as the French would say, rosés de maceration, with 12-16 hours’ skin contact for the Pinot Noir. They both have a gentle tannic quality, but it is the Rose Gold which has the aforementioned vinous quality of Pinot, greater depth and length. This was my wine of the night. It should also be said that the pink shade produced was near-identical to the colour of the Rose Gold bottle itself – a colour-matching exercise that is remarkably difficult to do!

Sandro believes Pinot Noir to be one of the great varieties, which was one reason to retain the Rose Gold as a 100% Pinot cuvée (another being that its 600,000-bottle production drives demand for grapes from around 50 farmers, whom Sandro does not wish to harm by substantially cutting the proportion of Pinot needed). Incidentally, Bottega source the Pinot for their Prosecco from Friuli rather than their home Treviso province, as they feel Friuli is better suited to the variety.

For me, introducing a rosé to the Prosecco DOC category is an attempt to bolster sales for the style, whose staggering growth in the mid-2010s had started to plateau, especially in their leading export market of the UK, whose c. 120 million bottle annual consumption is around 20-25% of Prosecco production. Introducing a new style, especially one likely to appeal to Prosecco’s core consumer group, feels like an attempt to extend the category – an attempt that the Conegliano-Valdobbiadene DOCG Consorzio has declined to implement.

But, when I put this to him, Sandro’s desire is for quite a different outcome; he doesn’t want more growth in the Prosecco category. He would far rather have it that his fellow producers (some of whom are significantly larger than his already large operation) and ultimately consumers, will make (and drink) a little less, but focus on making better quality wines for consumers to drink (and pay more for).

For him, introducing rosé is about reflecting historical production of pink wines in the region, where Pinot Nero and Raboso have both been cultivated for some time, and used to colour sparkling, Glera-based wines. Although he acknowledged that the steeper, cooler vineyards of Valdobbiadene and Conegliano have been less well-suited to, and less commonly planted to these red varieties, he believes the DOCG have made a mistake as he believes rosé can be another example of quality Prosecco.

Considering food pairings and drinking these wines with food, it was advantageous to have full bottles of each wine to go on and drink with dinner and the antipasti, over time. There certainly are types of food that do work, though I’d perhaps be more conservative on whether to match the wines with more flavoursome foods.

Sandro is clearly passionate about this and, early in the tasting, he flagged a new, gold-mirror-covered book that Bottega have just released, featuring 100 recipes to match with Prosecco wines, with the recipes generally coming from the Prosecco region.

Proseccos are ultimately relatively light and delicate in style, so more delicate dishes, such as white fish or mellow cheese generally make more sense to me, whereas some of Sandro’s recommendations felt likely to overpower the Prosecco wines. Rose Gold’s additional vinosity and depth, however, can definitely stand up to more robust flavours.

Either way, promoting food-friendliness is a laudable project for Sandro to take on, as a way to elevate the status of Prosecco, beyond a simple, slightly sweet quaffing wine. That’s no easy task and, as Robert Joseph fairly challenged during the presentation, few Proseccos actually get paired with food while many (UK) sommeliers like to pair brut zero sparkling wines with food – a style rarely seen with Prosecco (and a style which neither Sandro nor I think is particularly successful – though I believe Extra Brut can be rather fine, as I also wrote about for JancisRobinson.com).

In summary, this tasting confirmed for me that Bottega’s wines are good examples of what can be done with Prosecco, when quality is the target. It showed that Prosecco Rosé can be a valid style for the region, though it did also underline why Pinot is such a highly-regarded variety for sparkling wines with depth – a depth that’s hard for Glera to deliver.

Very pale gold. Rich peach tones, nutmeg and other brown spices, a touch of ripe apple and a hint of stony mineral notes. Good density of brown spice and stony notes upfront on the palate, with a fair amount of richness and body. Fairly dry overall and pretty good finesse of mousse. The core of fruit doesn’t