Klein Constantia is perhaps the most recognised name in the Constantia region. That is particularly as a result of their rejuvenation of the historic sweet wine for which Constantia was famous: Vin de Constance. Though others have followed suit, it is Vin de Constance that steals the international limelight.

However, as I discovered visiting the estate in 2015, and talking with young winemaker, Matt Day, and cellar door manager Alan Wickstrom, they are achieving excellence with dry whites too. 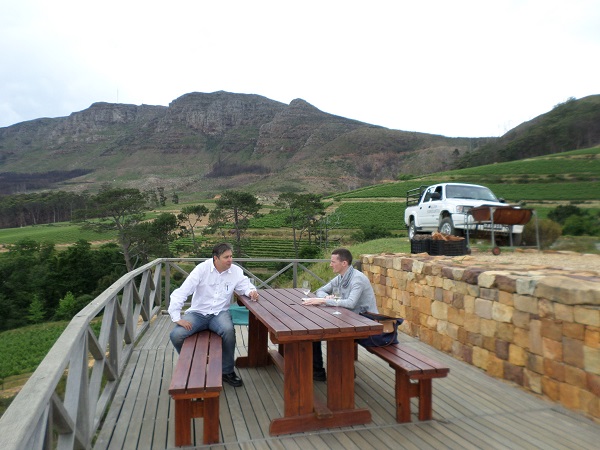 Discussing the estate with Alan Wickstrom over a glass of MCC

Reds are also made primarily at another estate, Anwilka, better suited to red grapes, though there is a Bordeaux blend, Klein Constantia Estate Red. The Anwilka estate was merged with Klein Constantia in 2012.

Klein Constantia is but a fragment of the original Constantia estate. That – all 1,500Ha of it – was founded in 1685 by Simon van der Stel, then the Cape Governor. Other fragments are represented today by neighbouring estates like Groot Constantia and Buitenwervachting.

Constance sweet wines first appeared in the mid-18th Century and made the name of the region, because its sweetness meant it could be shipped. It was thence drunk in European markets, becoming the most sought-after wine in the world. Napoleon had 36L wine a month to drink, of which 10L was sweet wine of Constantia.

However, 1885 was the last vintage in the Cape from the Constantia region. Successive disease and economic disasters struck: Oïdium (powdery mildew), then Phylloxera, then the abolition of slavery (obviously not a disaster in all other ways!), and finally a British free trade agreement with France.

Fast-forward to 1980 and the Klein Constantia estate was bought by the Jooste family for ZAR1m (c. £60,000), and reinstated. The family were the pioneers of Sauvignon Blanc in South Africa. They were then approached by a local winemaking Professor, Chris Orferr of Stellenbosch University, to recreate the sweet wine.

The team sought out planting material from around the valley to replant Frontignan – Muscat Blanc à Petits Grains. The first vintage of new Vin de Constance was 1986 and after that time, during Apartheid, it was only distributed through the South African embassy.

In 2008, Matt joined Klein Constantia under then-winemaker Adam Mason. However, the Jooste family sold the farm in 2011 to US investor Zdenĕk Bakala and Charles Harman from the UK, joined after the Anwilka merger by Bordeaux luminaries Hubert de Boüard of Angelus and Bruno Prats, ex-Cos d’Estournel. 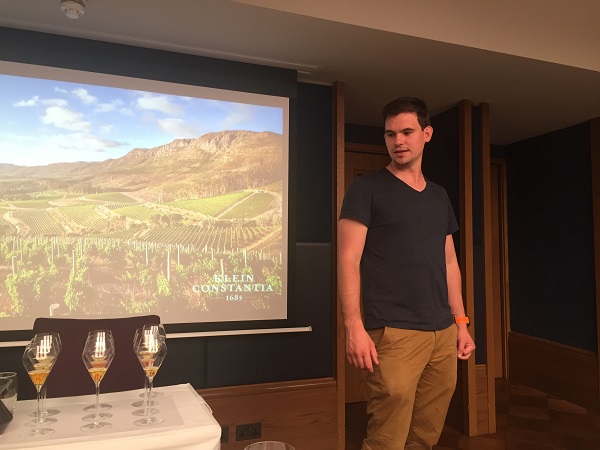 At that point, Adam left and Matt was asked to take over winemaking – a big task for a young guy, but which the wines today demonstrate he has done with panache. And, as Matt demonstrated leading the vertical tasting of Vin de Constance, he also does with honesty, pragmatism and good humour too.

2012 was Matt’s first full vintage from growing the grapes to making the finished blends, though he did blend and finish the Vin de Constance vintages, back to 2007, that we tasted in a vertical masterclass of Vin de Constance for 67 Pall Mall members in the middle of 2018. 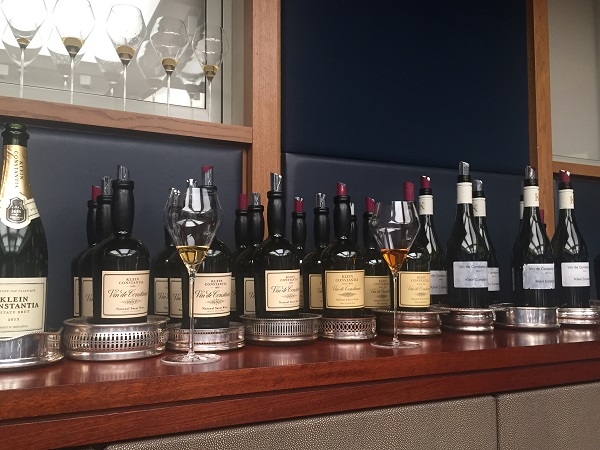 That vertical tasting finished with tasting tank samples of blending components of the 2015, as well as the just-bottled final blend. That demonstrated how blending can create something greater than the sum of its parts (admittedly including 15% of 2016).

I then joined the official release event for the 2015 in September 2018, held in Berry Bros newly-refurbished, smartly-appointed, Sussex Cellar: 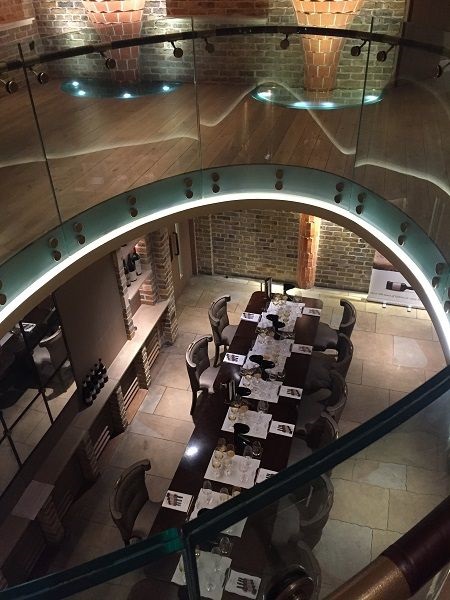 Berry Bros’ new Sussex Cellar, set up for the 2015 launch 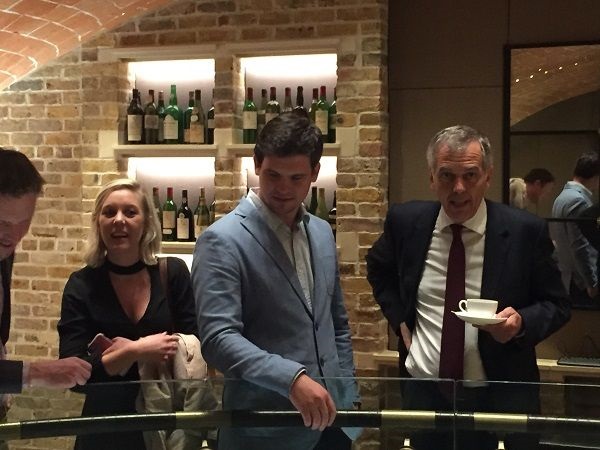 Matt Day, with co-owner, Charles Harman, preparing for the launch

There, Matt again took us through tasting tank samples of the blending components I6, I7 and I8. Not only that, but also we were able to taste the 2018 green harvest wine, to appreciate what that brings, as well as the 2015 Essentia fraction. 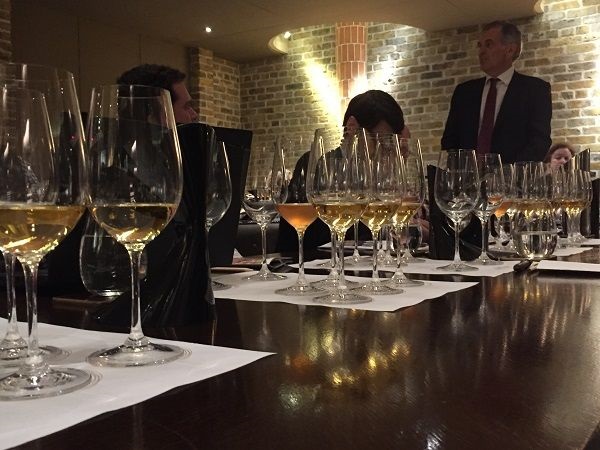 Vin de Constance 2015 launch tasting, including the first ever showing of Essentia

These are not only Sauvignons for immediate consumption, but also for longer maturation, including a joint venture, Metis, with leading light of Sancerre winemaking, Pascal Jolivet.

Stylistically, these broadly combine relatively ripe fruit and ABV up to 14%, with brisk acidity and freshness. Further, in common with Sauvignon Blancs from other parts of South Africa, there’s a particular fruit aromatic component of Kiwi fruit (Cape gooseberry!) plus boxwood pungency.

It’s a pity that, of the 6 single plot Sauvignons they make, only one – Pardeblokke – is commercially available, since others, especially Block 371, are particularly impressive.

South Africa has a warm climate but has a few pockets that can deliver cool climate varieties. Constantia, sitting on the Eastern flank of the Table Mountain massif, is cooled by the Atlantic on both sides, around the Cape Point promontory – being 5 and 7km from the vineyards respectively. Soils are 5-600myo decomposed granite, which can give salinity for additional freshness. 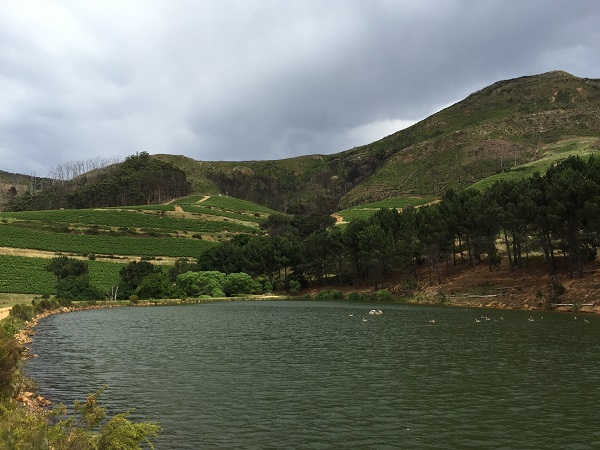 Klein Constantia is East to South-east facing, so gets cooler morning Sun, meaning bunches don’t get baked. The estate’s vineyards also reach up to 320m altitude. Because of the profile of sunshine, there can be up to a 3°C temperature reduction per 100m in the region. 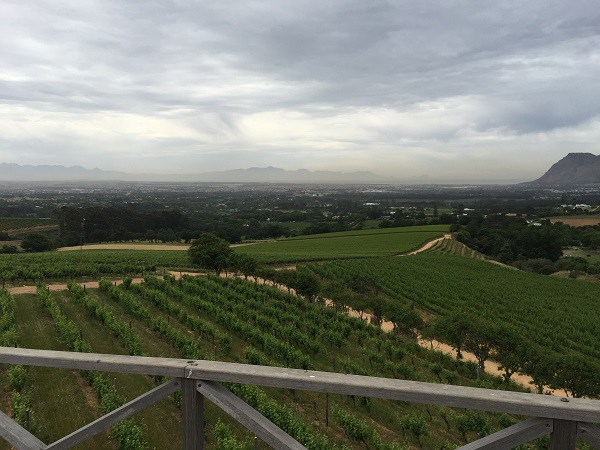 The East-facing sweep down the vineyards towards the winery

This combination of climatic and soil factors means that the c. 80Ha of Klein Constantia under vine is therefore 80% planted with white grapes, and primarily Sauvignon Blanc – though there is some Riesling and Chardonnay too. Vines are planted on 110R and 99R rootstocks.

In a normal year, little irrigation is needed, with 1,600m rain typical. However 2015 was a particularly dry year with just 800mm and was followed by very dry vintages across the Cape in the following 3 years, even in wetter, cooler Constantia. That meant rapid raisining of the Muscats, so total Vin de Constance harvest was just 1.5 months, compared with 2012’s more typical 3 months.

With relatively high rainfall most of the time, €2m was spent on anti-erosion restructuring of paths and soil re-working. Mustard for nitrogen and other sustainable or self-replenishing cover-crops are sown, with just mowing rather than ploughing-back into the soils.

Baboons are also a challenge, as around 460 live in Constantia. Fencing has been put up around the commercial vines, plus a higher altitude vineyard was planted at 350m, beyond the electric fence, solely to give to the baboons so they don’t eat the commercial crop.

Importantly, leafroll has been eliminated from the estate’s vineyards.

Harvest is by hand, with an initial selection in the vineyard, then some table-sorting

Sauvignon Blanc is planted at higher altitudes and windier zones, to maximise freshness. In fact, these cool zones are too windy to consider planting Pinot Noir, for example. Metis is their Sauvignon Blanc grown sustainably, though not yet organically grown or certified.

In 2010, the estate as a whole moved away from inorganic farming and a couple of vintages were required for the vineyard to readjust. Overall, yields are lower, but the wines are coming out more characterful.

The 6 single vineyard Sauvignon Blancs are ‘family wines’ only available in the winery, to explore the variation by block, apart from Pardeblokke.

The cellar was re-adjusted to focus on Sauvignon Blanc (and Vin de Constance), with gentler fruit handling to show the grape’s character, plus temperature and humidity etc. control built-in.

Matt is not comfortable with current winemaking practices for Sauvignon Blanc in the wider world, due to the availability of additives and practices that can be used to make ‘standardised’ Sauvignon Blanc styles. For example, a product exists that can give 10 times the intensity of thiol production during fermentation, for high intensity of passionfruit and other aromas.

Klein is therefore looking to move towards more organic vineyard practices and towards wild yeast and equivalent winemaking, to yield characterful and differentiated Sauvignon Blancs.

Today, almost no SO2 is added at crush and none at all in Metis, where the must is fully-oxygenated. This is based on a principal that working hard to retain volatile thiols through protective, reductive winemaking becomes a problem because these break down within 6 months. That means the resulting wines have low long-term ageing potential.

Instead, greater use is being made of neutral barrels for micro-oxidation, including some acacia, with extended lees contact, to give both better integration of any oak character and longevity for the wine.

Generally, a combination of PVPP, bentonite and isinglass fining is used to clarify and stabilise the wines, without need for filtration.

Vin de Constance is only made in good enough years, where healthy grapes have raisined naturally on the vine, and is 99% botrytis-free, with concentration and flavour development solely from raisining. 10-20,000L are produced in such years, with variation depending on how the raisining has progressed.

The wine was made only from Muscat Blanc, although historically Chenin Blanc, Semillon and others were also used, including the red Muscat clone and the red-fleshed variety, Pontac. Now, however, they are starting to incorporate some Chenin and Petit Menseng, to improve the overall