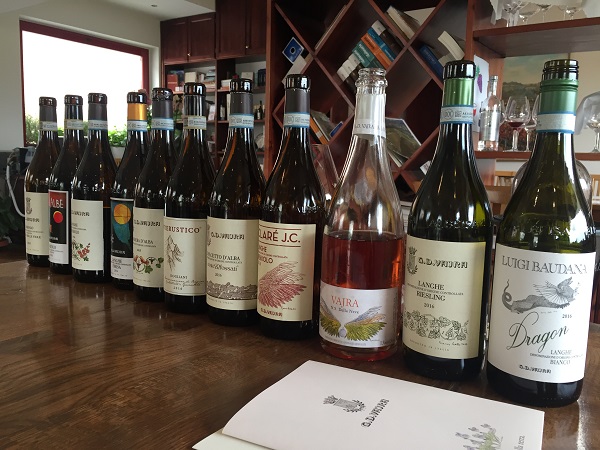 The Vajra and Luigi Baudana wines we tasted

A few kilometres South of La Morra, in the commune of Barolo, is the G. D. Vajra winery. Most recognised for their Bricco delle Viole cru Barolo, Vajra’s wines have appeared in the MW exams a fair few times and have been tasting samples several times for me.

So, it was inevitable that we would make an appointment here. With the harvest well underway when we arrived, we were initially met by viticulturalist and youngest son, Isidoro then eldest son and winemaker Giuseppe arrived later. Our appointment coincided with their Norwegian importers, which made for a nice dynamic in visit and tasting. 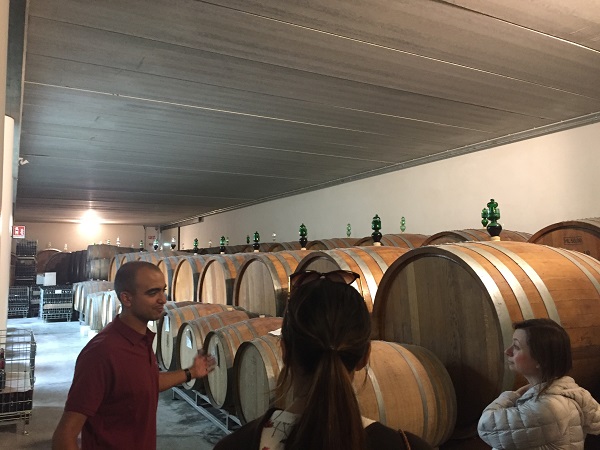 Isidoro explaining the vineyard techniques and winemaking of Vajra

I also tasted some wines again in January 2018 when Giuseppe presented some of the range at Liberty Wines’ portfolio tasting in London.

In 1970 the family restarted grapegrowing. 1972 was their first vintage making wine, as the vintage was so bad that they couldn’t sell the fruit. They were certified organic from 1971 to 1993, but after buying some small vineyards, certification got too expensive. They are now in the process of re-certifying, but have a sustainable certification in the interim. In recent years, they have been studying the flora of Bricco delle Viole to improve viticulture.

They have been diversifying grape varieties, with Erbaluce planted and production of Pinot Nero, as well as having a small Nascetta vineyard and Riesling also planted. They have also recently begun bottling a pure Freisa.

Most recently, they were able to buy the Luigi Baudana estate in Serralunga d’Alba, as a result of meetings with the Baudana family that convinced them that the Vajra philosophy best suited their wines.

For winemaking, grapes are sorted 3 times – in the vineyard, then a primary bunch selection in the winery, followed by single berry selection after gentle destemming. Fermentation and malolactic are both done in stainless steel, before botti maturation.

Giuseppe’s view of the much-talked-down 2014 vintage is that it is their best since 2008.

30% Nascetta, 30% Chardonnay, 30% Sauvignon Blanc, 10% Riesling. 13.5% ABV. A garagiste style wine, bottled under screwcap. From Baudana vineyard in Serralunga d’Alba, formerly owned by the Baudana family. The family had no kids, so put the estate up for sale. Vajra bought the winery but continued with a small winery on site, to maintain the philosophy and style of the estate. Dragon was originally Langhe Chardonnay (but with some Sauvignon Blanc hidden in amongst the vines). Vajra had a small Nascetta vineyard and also have added Riesling.

G. D. Vajra Langhe Riesling 2016 (16.5 / 20)
First made in 1992-3 and pressed in a different winery. Now all made at the main winery. Ideally, they would age this 1-2 years before releasing it, but people expect it soon after the vintage. Vajra pioneered Riesling, but now there are 27 producers in the region. Riesling is now back on the label, having previously been ‘coded’ into the label graphic. 2016 had a relatively late growing season with a sizeable crop – giving aromatics and high acidity. Sometimes they have an overnight cold soak, pre-fermentation to add aromatic intensity, but need to have elegance not just power, so take care with this.
A: Pale-medium lemon
N: Hint of reduction, then gentle toast; earthy, spicy touch. Some faint kerosene
P: Firm acidity, steely mid palate. Flinty. Lime-lemon. Creamy mid-palate. Honey touch to finish. Good length, with perfume

G. D. Vajra Langhe Nebbiolo Clare J. C. 2016 (16 / 20)
3rd vintage of this wine, originally labelled Claret, but had to remove the final ‘t’ after a legal threat from Bordeaux. Deep colour intentional, with a small amount of fizz and some RS to balance the wine. Up to 30% whole bunches were used in fermentation for the 2015 vintage, but this gave too much nuttiness, so have pulled back to 15% to keep vibrancy. Rack 4 days after maceration as colour extracts faster than tannins, thereby getting colour without so much tannin. Designed to be chilled.
A: Mid cherry red
N: Scented semi-carbonic notes, fresh red cherry. Some tar beneath. Stem herb
P: Bitter cherry and bitter almond. Subtle herb. Fairly firm tannin. Berry fruit. Rounded sweetness. A bit more than moderate length

G. D. Vajra Dolcetto d’Alba 2016 (16 / 20)
Dolcetto is having a resurgence amongst producers, with better vineyard planting. A variety with a shorter growing season, so planted on tops of hills in the wind historically, then relegated to lesser blocks under block-planting. During winemaking, reduction is a particularly problem for Dolcetto, so the 2017 has been racked twice already by late September. Dolcetto was often ignored after its first racking, to focus on Barbera and Nebbiolo, thereby causing many reduced wines.
A: Deep purple
N: Herbal, mealy, bitter almond. Gentle toast. Blackberry and blueberry fruit
P: Rich blackberry fruit. Medium-full body. Fresh not brisk acidity. Furry firm tannins. Velvety texture beyond the tannins. Inky better-than-moderate finish