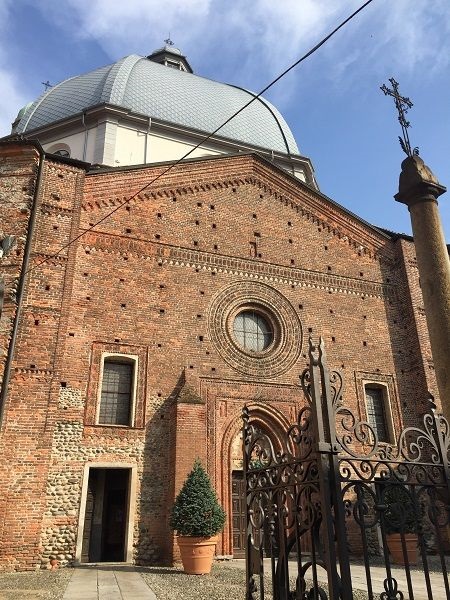 Gattinara has a pretty church, which is the highlight of an ordinary town

Gattinara is one of the “G” twins in the Piemontese wine constellation, being barely 5km across the Sesia river from Ghemme. Gattinara was amongst the earlier denominations to be granted DOCG status in Italy, in 1990, as one of the first 11 regions to achieve that and only 10 years after the “B” twins, Barolo and Barbaresco.

Like the Bs, Gattinara and Ghemme are both Nebbiolo growing areas – known locally as Spanna. Ghemme is barely 60Ha, but Gattinara stretches to almost 100Ha. Historically, that was far larger – 600Ha – with greater recognition and renown than Barolo. Over time, Gattinara’s star waned and its vineyard area retreated, but it remains a significant outpost for quality Nebbiolo-based wines.

Gattinara is in the North of Piemonte, less than an hours’ drive from Lake Maggiore, and as such is one of the cluster of denominations that comprise the Alto Piemonte zone – albeit comfortably the most significant, ahead of the likes of Bramaterra, Boca, Carema and so on.

As an Alto Piemonte wine, its proximity to the Alps brings extra coolness and freshness of acidity, compared with the power of Barolo. At its best, Gattinara produces wines with greater perfume and more delicate tannins; at worst, the cooler climate can challenge ripening and leave a coarse greenness.

The vineyard area sits on a large, mainly South-facing shoulder of rock above the Northern end of the long, thin, 3-horse town that is Gattinara itself, though most are screened from view from the town by surrounding forest. Soils are generally volcanic-derived, iron-rich gravels, with some limestone here and there.

We stopped in at Gattinara for one night, to break the journey from Alba to Maggiore, without any particular plan other than staying at a B&B that claimed also to be a winery – Anzivino, named after the owner who set it up in 1998. We then wandered through the town, to stumble upon the tasting room of leading producer, Nervi, at the South end of town and tasted their range.

Nervi are particularly interesting because, 6 months after our visit, famed Barolo producer, Roberto Conterno, acquired their 28Ha of vineyards for €5M. Given that Cru Barolo can change hands for that amount per Ha, this seems a very good investment – especially as Roberto had consulted for the previous Norwegian owner, Erling Astrup, when he was looking to buy the estate originally in 2011 – so he knew the quality of the vineyards well. Smart man.

We also stopped in at the excellent-looking Enoteca Regionale, whose range of wines from pretty-much all the small DOCs of the Alto Piemonte area was extensive and interesting. But the whole place missed a massive trick – staff who didn’t seem interested in engaging visitors and only a couple of bottles apparently open for people to taste, without any guidance as to how tasting was actually achieved. They should visit the Cave de Gigondas to get a better idea… 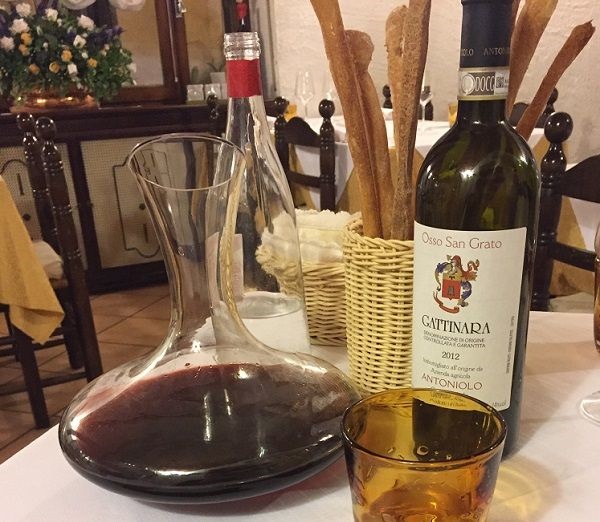 Overall, we found some real interest for a Nebbiolo lover here, because, when the wine is good, it is truly excellent. Standouts were Nervi’s Molsino cru Gattinara 2009 and Anzivino’s 2009 Gattinara Riserva, with the relative warmth of the year bringing the extra dimension of richness to balance the acidity – certainly in the Anzivino wine. We also very much enjoyed a classy bottle of cru Osso San Grato Gattinara 2012 from reclusive producer Antoniolo with dinner (though I didn’t take a formal tasting note).

Brief profiles of the two wineries we visited are here: