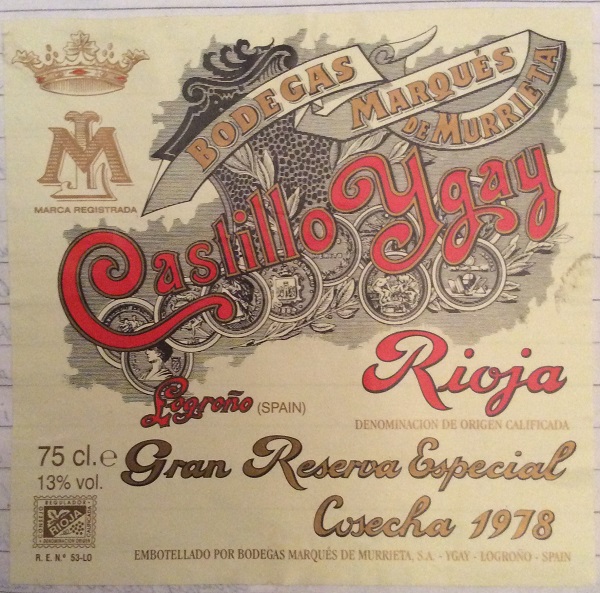 There are many Rioja bodegas with the vaunted title Marqués in their name – Riscal, Cacéres, Concordia inter alia. In the UK, those of lordly title are called ‘peers’, but these are certainly not all equal. For me, it is Marqués de Murrieta, led by their top-flight Castillo Ygay Gran Reserva Especial, that is truly the aristocrat.

Murrieta is centred on its 300Ha contiguous estate, Finca Ygay, to the East of Logroño (leaving aside the motorway that was subsequently placed through the lower part of the estate, splitting it in two). Sadly, this was the opposite side of Logroño for us to visit ahead of the IMW Symposium, nor were we lucky enough to be in the group treated to dinner at the bodega whilst there. But I have enjoyed the wines on several occasions, including a Planet of the Grapes wine dinner in October 2014. 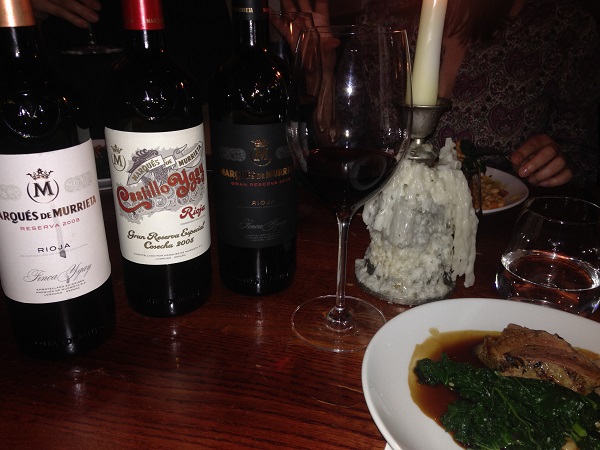 This single estate is in a ‘château’ model, and they consider themselves the first French-style château Rioja (which is interesting, given Contino’s position on that), though they were later to bottle their own wines than nearby contemporaries, Marqués de Riscal.

Across their 300Ha, the vines are on average 35 years old and there is a 150m difference in altitude from the lower slopes, up to the top of the hill where the bodega is. It is here, around the bodega, that the best vines which provide the fruit for Castillo Ygay are situated, in La Plana at 485m.

Entertainingly, one plot by the bodega was to be planted with Tempranillo, so they bought the young vines from their nursery supplier and planted them out. A couple of years later, it became clear that they’d actually been sent white Viura!

They left the vines in place, expecting that they would be replanted in 30 years to red vines, but in fact found a gem and left the vines there. Now over 70 years of age, this is the Capellanía vineyard, source of their eponymous white.

The old-school style of Capellanía

Capellanía underwent a significant change in style after I first came across it in the 1995 and 1996 vintages. Originally a nutty, oxidative, umami-laced, classic Rioja Blanco, it has been transformed into a fresher, fruitier style, with 15 months in new French oak to give overt oak tones.

To my sense, their other wines have perhaps undergone some ‘modernisation’ as well, with riper, more overt fruit. This is probably reflected in redesigned and updated labels for example between the classically-styled Reserva Especial Prado Lagar 1995 and the Reserva 2000.

The creation of Dalmau in the Vino de Autor mode is a clear step in the modernist direction. Dalmau also includes a Rioja oddity – Cabernet Sauvignon. Back in history, Cabernet was planted at Murrieta and since Dalmau comes from a pre-1970 vineyard (1942), Murrieta have a derogation to include up to 15% of it in the blend. That adds a plushness and depth of colour and flavour very much in a ‘modern’ idiom, coupled with a year in new French oak.

What I most noted, with the 2005 vintage, was more marked ripeness in Castillo Ygay: richer red fruit character, 14% ABV and a somewhat softer, fuller-bodied profile than only slightly older vintages, like 2001. Having experienced the sublime elegance and delicacy of the extra barrel-aged versions of Castillo Ygay 1978 bottled in 1995 (216 months in oak) and subsequently the 1970, I wonder whether a riper style is the right move for this label.

If it is a deliberate move rather than a one-off with 2005, will it give the wines the acidity and structure to perform such effortless feats of ageability as Castillo Ygay has historically achieved? This remains to be seen and I will certainly look out for 2010, assuming one is made.

Beyond Rioja, the family are also present in Rías Baixas, having bought and invested in the 12Ha Pazo Barrantes estate, making 120,000 bottles of smart Albariño a year. Initially, they took a Rioja approach to viticulture, training the vines low with higher densities. But the increased humidity and reduced air flow led to mildew and botrytis rot problems, meaning the vines had to be uprooted, replanted and trained high to 1m above the ground.

Pazo Barrantes was served as the aperitif ahead of the POTG dinner, the tasting notes from which are below.

Marqués de Murrieta Rioja Gran Reserva 2005 (?? / 20)
Reserva and Gran Reserva wine selection decisions are made in the winery, after 10 months in American oak. Taste, grade and send c. 10% to the Gran Reserva, if the vintage is good enough. 26 months in oak, then 4-5 years in bottle. Aim for a silkier style over power. In 2005, they didn’t have to do much work in the vineyard, so not much in the winery.
A: Mid-deep garnet; narrow rim
N: Fudgy, spicy oak. Chilli, cinnamon. Earth & gravel mineral. Rich, fresh red cherry fruit line in the middle. Complex sweet / savoury
P: Red cherry, gentle vanilla, smoky oak & gravel mineral. Spicy mid-end palate. Rich, but maximum medium-full body. Bright acidity. Very fine, chalky tannins. Long though slightly alcoholic (14%) finish