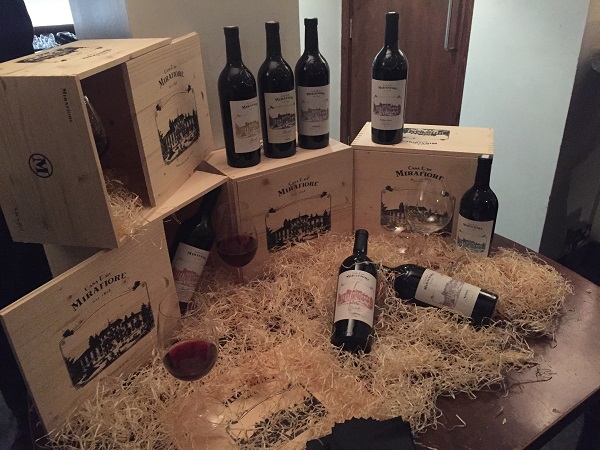 Display of the wines served at E. di Mirafiore dinner at POTG

We got to know the wines of this long-standing, major estate based in Serralunga d’Alba at a late-2017 dinner hosted by Great Western Wine, the retail arm of Fontanafredda’s UK importer, Enotria&Coe. Luca Martini, their brand ambassador and Best Sommelier in the World for 2013 introduced the wines at Santini Italian restaurant, Pimlico.

As he confided later, he did not have control over the menu, which was hit and miss in terms of food matches and whose vast portions detracted from the overall experience. He was also reliant on their service staff for pouring, which resulted in a lot of sediment in glasses for the older wines and on my first glass of the 1996, cork crumbs covering almost the entire surface of wine!

Nevertheless, this dinner was a great way to appreciate the development capability of great Barolo, as the vintages shown were all good, including the very fine 1996 and highly reputed 1982.

The estate has 85Ha over 350 parcels in Serralunga d’Alba and Barolo communes, with a monopole on the Vigna La Rosa cru that is contiguous with the property. Parcels are vinified separately, with fermentation 50% in stainless steel and 50% in wood. Maturation is in a mix of smaller and larger oak due to variation in parcel sizes.

Served as an aperitif in the downstairs bar, before we moved up to the private dining room.
A: Pale lemon
N: Neutral, chalky, faintly toasty apple pip
P: Crisp acidity. Yellow apple. Flint. Fair length. Good example of the style

By complete coincidence, a matter of days after getting introduced to Fontanafredda, we went to a Planet of the Grapes dinner for the wines of Casa E. di Mirafiore (as shown in the above photo)…which turned out to be the sister property of Fontanafredda! These are both now owned by Oscar Farinetta, the entrepreneur who founded the Eataly chain.

Alberto Frea, Brand Ambassador for E. Mirafiore and Fontanafredda introduced the estate and the wines.

The first King of Italy bought 2 estates – Fontanafredda and E. Mirafiore – for his mistress. Mirafiore was originally a hunting lodge, then vines were planted and winemaking began in 1878, including such innovations as the first concrete vats in Barolo. Mirafiore was inherited by the mistress’ son – Emanuele of the Mirafiore family, hence E. di Mirafiore.

Emanuele’s son Gastone inherited and bankrupted the estate. With phylloxera in 1920s compounding the misery, the estate was sold. For 70 years, the brand was not used until bought in 2009 by Farinetta and resurrected.

The Estate has 80Ha primarily in Serralunga d’Alba, with some in Barolo. They also have Dolcetto in Serralunga – in the Jori del Matina vineyard, which is East-facing so catches the morning Sun.

They will have organic certification from 2019 and have for some time not used artificial pesticides. Their vineyards are relatively windy, so it is easier to keep the humidity down and manage fungal pressures. They are trying to avoid using metals, so are adopting algae derivatives instead of copper for fungal treatments – though this means additional labour and treatment costs of around €2m per year.

They have managed a 40% reduction in SO2 as acidity, alcohol and tannins are high enough.

The Mirafiore style is aiming to be classical and to take time to drink. They don’t decant so the wine can change in the glass.

Casa E. di Mirafiore Barolo Riserva 2004 (17.5 / 20)
First Riserva made by the estate, with 2005, 2007 and 2010 made and to be released.  Outstanding vintage for the region. 3 years in old oak then 1 year in concrete for oxygen-free ageing, giving equivalent of bottle ageing but in large volumes. 1 year in bottle, in addition to that. Intention for a 10-year post-harvest drinking window to open. Multi-vineyard blend, with selection pre-fermentation. Up to 60 days’ maceration, as fruit and tannin quality is high enough.
A: Deep (!) garnet
N: Deep, still plenty of blueberry and black cherry fruit. Smoke and struck flint. Old tobacco and leather. Broad, slightly tarry rich tobacco. Dense
P: Fresh, but rich cakebread fruit and dried fruit. Spice, smoke. Masculine scented touch. Long. Spicy / meaty finish. Very dense and fine. Firm, resolving tannins