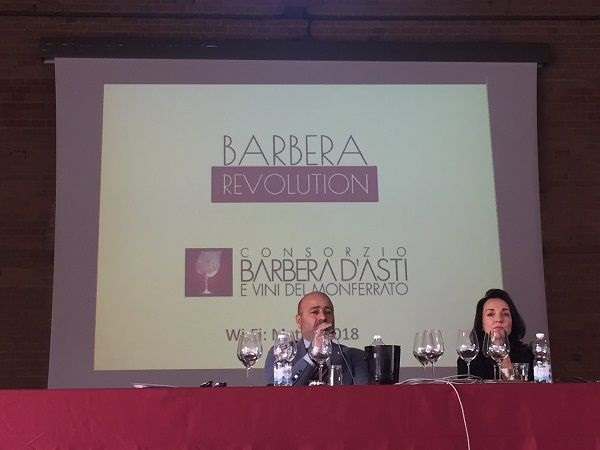 The President of the Barbera d’Asti and Monferrato Consorzio Tutela, Filippo Mobrici, welcomed us to the old, covered cattle-market in the central square of Nizza Monferrato, the Foro Boario – an excellent, spacious venue for a tasting masterclass of over 100 people. 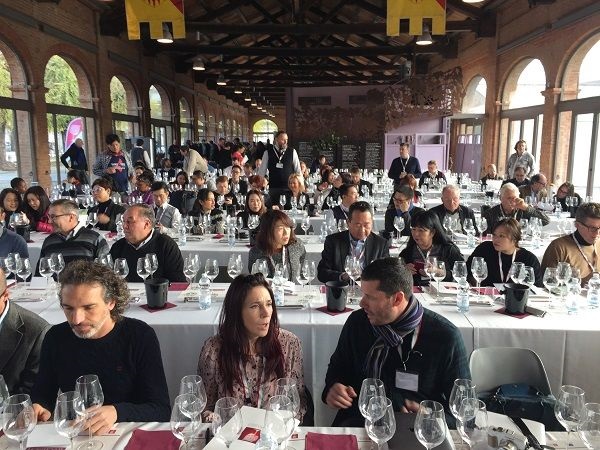 The imposing but light and spacious Foro Boario

He explained why their marketing drive is entitled Barbera Revolution: they believe that the quality of Barbera is at the point where it can demonstrate itself as being a great grape, with strong international potential. That’s been reflected in increasing numbers of international award-winning wines, including Wine Enthusiast magazine’s top wine of the year.

Kerin O’Keefe of winemag.com then took us through a proper, seated, horizontal tasting masterclass of Barbera from the same vintage, 2016. She explained that, in her view, of all Italian grapes, Barbera has made the biggest improvements in the last 10-15 years. 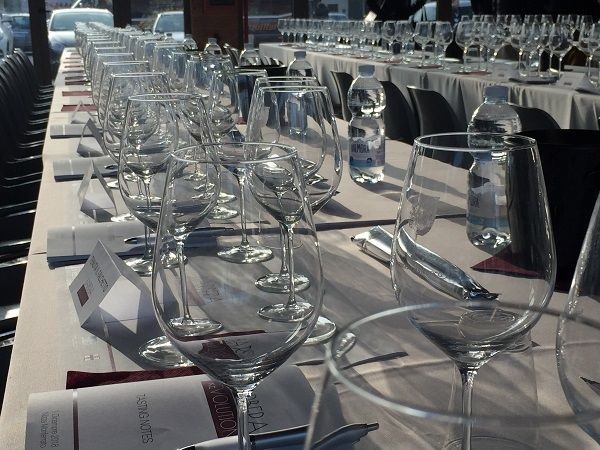 Glassware teed-up for the tasting masterclass

The tasting comprised 4 flights of 5 wines, beginning with unoaked, straightforward styles of Barbera d’Asti and into progressively oakier and higher-alcohol styles of Barbera d’Asti Superiore. The masterclass was followed by lunch at which the producers showed mainly 2011 vintage, bottle-aged examples of the masterclass wines, and new releases of 2017 youthful styles.

Curiously, especially given our location, we didn’t have a flight of Nizza wines in the masterclass, whose perceived quality led to their elevation in 2014 to a standalone DOCG, rather than just being a recognised sub-zone of Barbera d’Asti. All the tasting notes below on Nizza wines came from walkaround tasting of individual producers’ full ranges that included Nizza. The average quality was notably higher, so Nizza is worth seeking out.

As noted elsewhere, it was a pity to do this masterclass and its subsequent lunch wines hampered with a cold, which likely depressed my scores a little. Fortunately, like the Nizza wines, many Barberas were tasted on prior days.

That included one wine, Il Falchetto’s Bricco Paradiso 2016, which I tasted previously without cold-influence, and scored reasonably closely afterwards with that cold effect: 15.5 / 20 then 15 / 20 or 89 / 100 then 87 / 100. This wine and its big brother Bricco Rocche Nizza Riserva 2016 (16, 91) both clocked-in at a whopping 16% ABV. This raises one of the issues with Barbera – alcoholic ripeness can get high, with many superiore examples topping 15% ABV.

As I discussed after the masterclass with Il Falchetto’s owner-winemaker, Giorgio Fornia, it’s hard for him to keep ABVs down with steep, South-facing vineyards near Nizza and achieve good phenolic ripeness. Nevertheless, for the Bricco Paradiso, I think the 16% didn’t do the wine – which is also in a modern, 80% new French oak style – favours because the freshness was lost a little and the alcohol burn penetrated.

However, the 2011 of the same wine – still 15.5% ABV – showed that a little more restraint can give a balanced, enjoyable and fine wine, that I scored substantially higher than the 2016. I would also like to see these wines in a few years, to see how the wines absorb the new oak influence.

In a similar comparison, we tasted two wines in succession at the masterclass: Tenuta Bricco San Giorgio, Rossomoura Barbera d’Asti 2016 (15, 86) and Tenuta Olim Bauda’s La Rochetta Barbera d’Asti Superiore 2016 (16, 90). Both were 15.5% ABV, but the density and freshness of the Olim Bauda wine demonstrated how a wine at that ripeness can work when done well.

Thinking about these examples, it’s important to say that acidity is an important dimension of Barbera’s style, and that I tend to favour the 13.5-14.5% ABV range for the grape. However, it would be grossly over-simplistic to make statements like “Barbera over 15% ABV doesn’t work”, or that “heavy oak use and the modern style is wrong”, because there are producers who show it is possible to either or both and make objectively good wines.

Barbera is a native of Monferrato and is Piemonte’s most planted grape. With dark bunches, it has naturally high in acidity and low in tannins. It is naturally vigorous and high-producing. 4,129Ha are produced in the Asti DOCG, with 2 sub-zones – Tinella and Colli Astigiani – in addition to the former subzone, Nizza, which is now its own DOCG. The climate is continental.

Barbera d’Asti was a DOC in 1970 and added the G in 2008, with 90% minimum Barbera. Minimum ABVs are 12% and 12.5% for the Superiore. Superiore also requires 6 months in oak. Recent research suggests that the grape only really expresses its aromatics at around 13.5% ABV. 2017 produced 21.1M bottles, around 50% of which was exported, with the US, Germany, UK and Canada the top 4 markets.

In the past, Barbera d’Asti was grown in huge volumes for early drinking, taking advantage of its low tannins and high acidity. However, around 25 years ago, a core of producers began to lower yields – the first step to quality.

Interestingly, no specific mention was made of the role of Giacomo Bologna of “Braida” fame, in causing that process to start. As explained in my separate profile, he had 2 visionary beliefs that I believe shaped the category.

First, he thought that Barbera could make quality wine worth bottling, which he commenced in 1961 when no-one else was. Second, that Barbera had affinity for oak so should be matured in barriques to add complexity and structure, when others were using old chestnut botti. Both of these unilateral moves helped create the movement that ultimately defined and elevated Barbera d’Asti.

Nevertheless, looking at the industry as a whole, ensuring MLF completed was then added in the 1980s and 1990s to manage acidity. Oak maturation then followed to drive complexity and ageability – just as Bologna was doing with his leading Bricco dell’Uccellone and Bricco della Bigotta wines.

Initially that led to widespread use a lot of new French oak, but in that last few years, producers are moving to larger oak and mixes of older and newer, to make the oak impact less overt.

That means a range of styles exist today that can be viewed along scales of lower to higher ripeness and often corresponding oak-influence, with fresher, less ripe, stainless steel-matured examples typically for immediate consumption, and riper, bigger, oakier styles for ageing.

Climate is continental. Soils are either white – calcareous clay-marls, producing full-bodied, deep-coloured wines – south of Asti, or younger, Asti sands in the middle of the Asti-Monferrato soils. Wines from sand tend to have less acidity and are for earlier drinking. Barbera is typically planted in South-facing slopes, in the best sites on each hill.

The masterclass wines were all 2016s, chosen as a reasonably classic vintage following cool 2014 and hot 2015. With a cool early period, but followed by very warm and dry August and September vintage conditions were ideal for Barbera. With good acidities and sugar levels, they regard this as a 5* vintage for the Asti region. Diurnal temperature variations were particularly significant to preserve acidity, especially in September, where up to 15°C shifts were observed.

I wondered about the influence of clonal selection in the recent advancement of Barbera’s quality, given that this approach is often found in regions undergoing significant quality shifts, such as the Douro’s variety assessment programme in the 1980s.

VP, Stefano Chiarlo explained that this has been both an important and relatively recent factor. After the 1980s, the 8084 clone arrived from Torino University to change the bunch structure – giving smaller bunches with thicker skins and heavier polyphenol content. 8084 bunch weights are as low as 200-250g, delivering somewhat lower acidity and much denser, clearer fruit expression.

Following that, at the end of the 1990s and early 2000s, 3-4 more clones came to the fore, so there are now 5-6 clones widely planted, giving more than 30% richness in body vs. clones of the 1960s and 1970s. He added that rootstock research has also been very important, with 428 and SO4 making significant impacts on reducing vigour and yield.

These new clones are also more resistant to botrytis due to thicker skins, so helping to contribute to a 70% reduction in fungal treatments since the 1970s – though green harvest to aerate bunches is a more important factor for reducing fungal attack.

A very interesting new development underway, is creation of a sensory map by region, using micro-vinifications, to give a more accurate profiling of vineyard areas by style. Potentially, that could lead to further sub-zone identification, as defined by commonality of style. After 1-2 years’ work with encouraging initial findings, full, ratified results are expected in 3 or 4 more years. 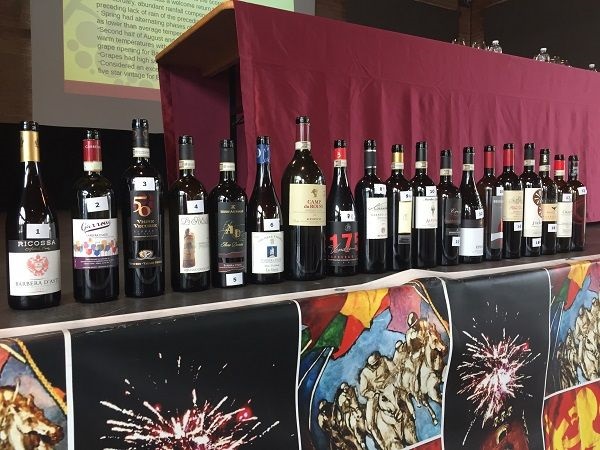 The first thing to highlight is that the average quality of Nizza wines was noticeably higher than even the superiore category, and I can see why it has become its own denomination. In particular, both Michele Chiarlo’s LaCourt Nizza Riserva 2015 and Cipressi Nizza 2016 stood out. It was the 2015 vintage of Cipressi that stole Wine Enthusiast‘s top spot in 2018. Tenuta Olim Bauda Nizza 2015 was also right up there.

I stumbled upon a quartet of wines from Bava at dinner, following the walkaround tasting where they had been ensconced in the ‘phantom’ second room. I’m glad I encountered these, including their PianAlto Nizza Pian Alto di Crena 2014, but starting with a stupendous 2010 Bava Stradivario Barbera d’Asti Superiore from La Pieve di Cocconata, which was one of the red wines of the entire visit. Their 4 wines all showed very well.

The straight Barbera d’Asti wines are generally designed for early, easy drinking. Pico Maccario was again up there with Lavignone Barbera d’Asti 2017 the pick of the bunch – and a Tre Bicchiere winner apparently too. 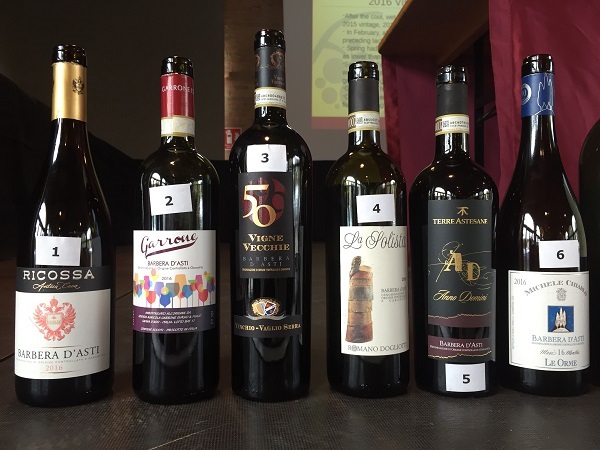 The straight Barbera d’Asti wines shown at the masterclass

Single producer’s wine selected each year by the members, to be own-labelled as the Consorzio’s representative wine. 14% ABV.

Caudrina, La Solista Barbera d’Asti 2011 (15.5* / 20; 89* / 100)
*Tasted with a bit of a cold. By Romano Dogliotti. Sandy soils. 14.5% ABV.
A: Deep black-garnet
N: Meaty, old leather and balsamic development. Some stony mineral
P: Full body. Spicy and earth. Rich and full bodied. Polished tannins but quite firm. Quite sophisticated, if not that long 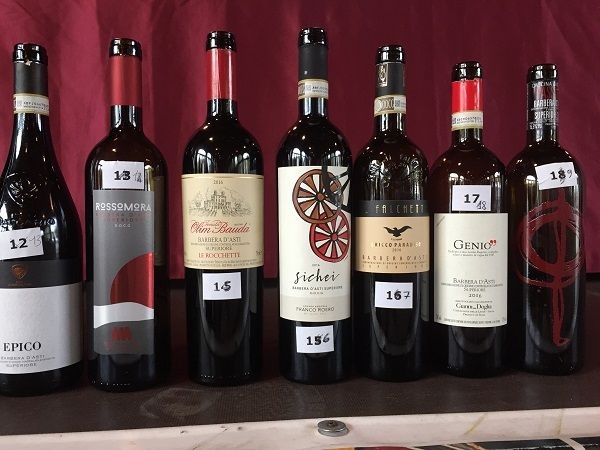 Consorzio Own-label, Barbera d’Asti Superiore 2015 (15.5 / 20; 88 / 100)
Single producer’s wine selected each year by the members, to be own-labelled as the Consorzio’s representative wine. 14% ABV.
A: Pale-medium ruby-purple
N: Some breadth of fresh leather and bitter almond hints, with nutty older oak tones and only hints of vanilla
P: Ripe and rich black cherry with a touch of bitter red cherry too. Moderate acidity and full body give a powerful style. Light to moderate, fine tannins. Savoury, dusty and nutty character through the finish. Touch of warmth. Not the most complex, but well made