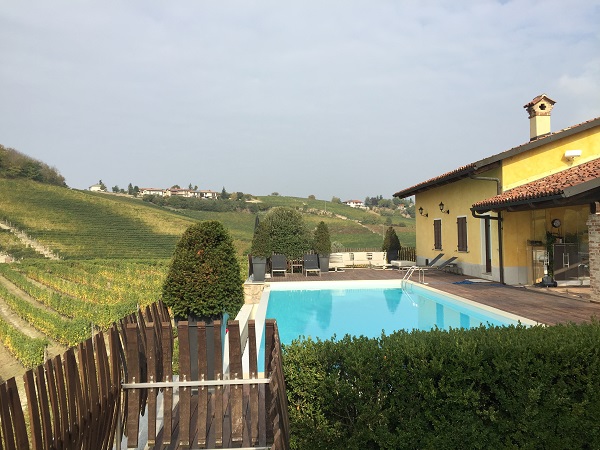 View across the Elvio Cogno winery and house

Another recommendation and introduction by David Way, and an excellent visit to a quality-orientated estate. We met Valter Fissore, husband of Nadia Cogno and winemaker, along with Denise Quadrumolo, their person responsible for Marketing (and, interestingly, WSET Diploma student). We also met their epically-happy-to-see-you, fluffy, ginger-white winery cat and later their super-bouncy, terrier winery dog (alongside Nadia). Both ace.

Based in the commune of Novello, Elvio Cogno focuses on Baroli including some cru bottlings, but also are one of the producers working to revive the Nascetta del Commune di Novello DOC. It was the finest example of the variety we tasted, amongst a fair few.

Several of their key vineyards are around the property, including their Ravera cru with its Bricco Pernice sub-zone that makes one of their flagship wines: 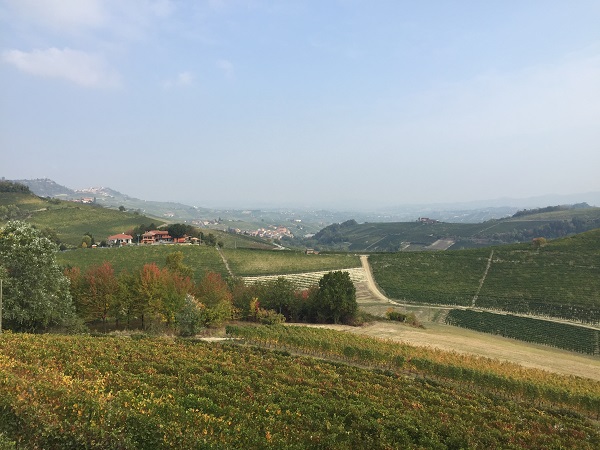 as well as the vines that make up Vigna Elena, which include the rare Nebbiolo Rosé (which I subsequently learned is not, in fact, a clone of Nebbiolo, but a separate, parent-child related grape variety – as documented in the excellent Wine Grapes): 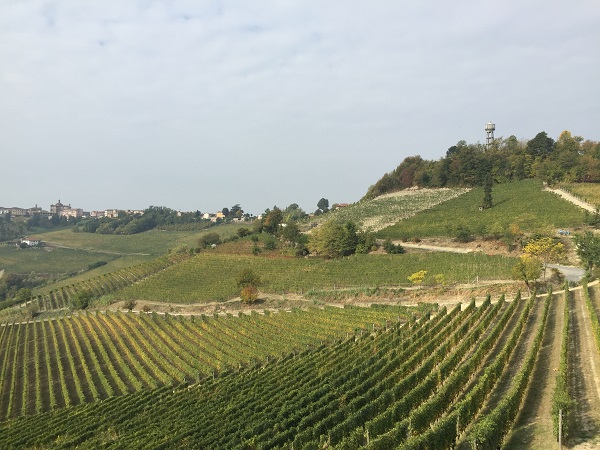 Barolo harvest was well underway when we visited, with a truck of Nebbiolo arriving for destemming as we watched. This gave us a chance to discuss some winemaking philosophy. 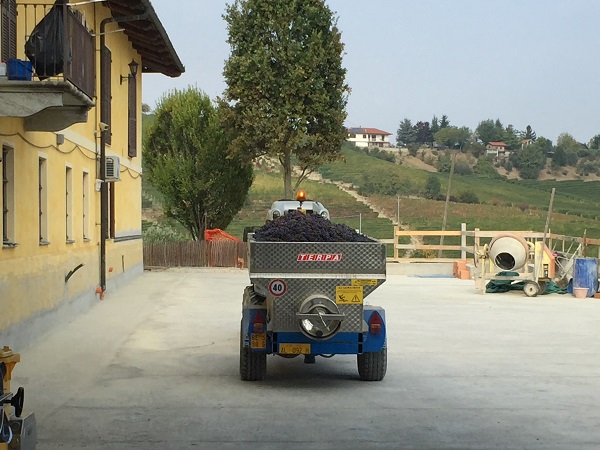 Freshly-harvested Nebbiolo grapes arriving at Elvio Cogno during our visit

With Dolcetto, they were achieving far more supple, approachable tannins than often is the case. Valter’s approach to that is primarily a fast fermentation and short skin maceration, to avoid the rusticity Dolcetto often presents.

Dolcetto has very deep colour and plenty of flavour compounds which will extract quickly, so a 3-4 day fermentation will give all the flavour needed in 48 hours. After completion of fermentation, he decants off the skins to take to malolactic fermentation. In addition, its important to get ripeness right in the vineyard and to crush carefully to avoid any bitter seed tannins.

With Nebbiolo, by contrast, he aims for long macerations even by local standards, with 40-50 days of maceration. This is intended to polymerise skin tannins with seed tannins that will re-extract quickly in 14-15% ABV ferments. Tannin perceptions initially rise, but then fall back somewhat after polymerisation. Here, the fine quality of the tannins permit this approach. Also, he destems very gently and crushes just enough to break the skins.

He is experimenting with whole bunch fermentation on a tank of Nebbiolo, which will most likely be blended into other cuvées at this stage.

His view of the incoming 2017s was good quality fruit, in spite of the very early harvest. Elvio Cogno has a plot of pre-phylloxera Barbera which they bottle separately. In 2017, this has very deep colour and firm tannins – the reverse of conventional Barbara – and is already revealing graphite minerality over a core of mixed fruit. We tasted a tank sample, which was attractive, in spite of the very fresh acidity from having just completed fermentation and not yet begun MLF!

The regular 2017 Barbera also showed very deep colour but with much gentler tannins and a fruitier aromatic profile, with the 2017 Dolcetto also showing notably softer tannins than most Dolcetti – again, despite not yet going through MLF.

Whilst we were tasting and I mentioned my label book, Valter brought down a bottle of Bricco Pernice that Pippa Middleton had signed when she had recently visited (she has WSET Level 3). 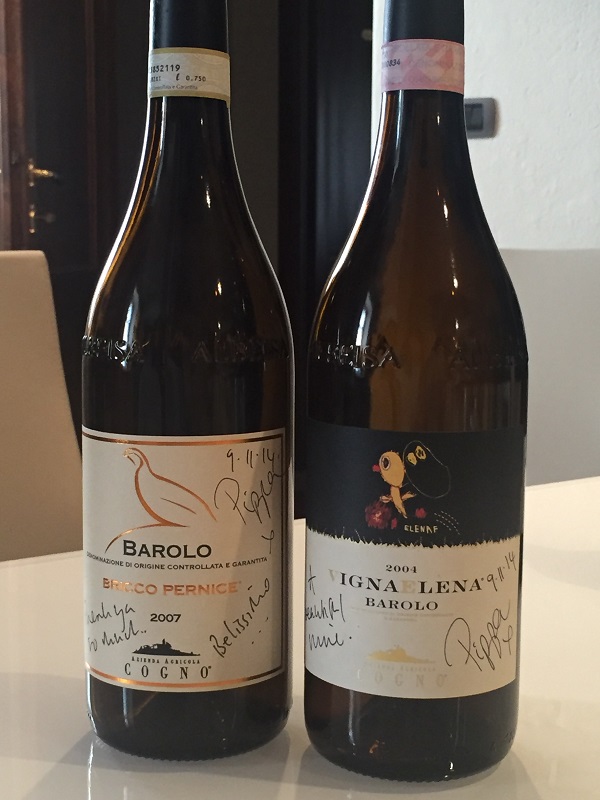 Finally, when we had finished, Valter incredibly kindly signed and gave me a copy of Alessandro Masnaghetti’s excellent, very in-depth guide to Barolo and its MGAs – the Menzione Geografica Aggiuntiva – i.e. the crus. That generosity reflects his nature and the nature of so many people in the wine world.

Speciality of the house, resurrected and pioneered by the estate in the late-90s. Now 8 producers in Novello are making Nascetta and an association has been formed, with around 30 producers across the Langhe. Grapes from the top of the hill of the Ravera cru. First vintage was released in 1994 with the DOC just being ratified in 2010. Only in Novello can the narrower, 100% Nascetta DOC be given. Valter characterises the grape as a semi-aromatic white and an interesting variety with good extract that can age like Riesling or Verdicchio. No MLF is done to retain freshness and linearity. 14% ABV.

Elvio Cogno Barolo Cascina Nuova 2013 (16.5 / 20)
‘Baby’ Barolo bottling, made since 2006, using young (15 year old) vines from the Ravera cru vineyard on a steep-ish Southern-exposure. Intended to bring new generations into Barolo in a style that is easier to understand and approach – aim for a fruity, more linear and elegant, Pinot Noir style. Presence of the bottling also helps with replanting, as any new vines can always go into the blend.
A: Pale garnet
N: Hints of earth and tar, to highly intense aromatics of red cherry fruit. Some fresh spice overtones. Attractive. Savoury but not austere – appealing
P: Sweet red cherry fruit entry with hints of balsamic and spice. Medium-high, fine tannins. Definitely Barolo but definitely more approachable. Alcohol warmth at the finish

Elvio Cogno Barolo Ravera Vigna Elena 2011 (17.5 / 20)
A plot within the vineyard planted with 100% of the rare Nebbiolo Rosé ‘clone’, that gives elegance and is also the latest-ripening, so likes warmer vintages, like 2011. 6 years total ageing, including 3 in botti. 4,000 bottles total production. In fact, after our return, I read an article that explained that Nebbiolo Rosé is in fact not a clone of Nebbiolo, but a different, closely-related variety.
A: Pale brick-garnet
N: Stewed tomato tone. Some dried rose notes indeed. Some meaty hints emerging. Lifted rose tones emerge in glass. Touch of balsamic
P: Juicy red cherry. Some tomato leaf, but fantastic aromatics through the mid-palate. Maturing, high tannins. Fine. Long