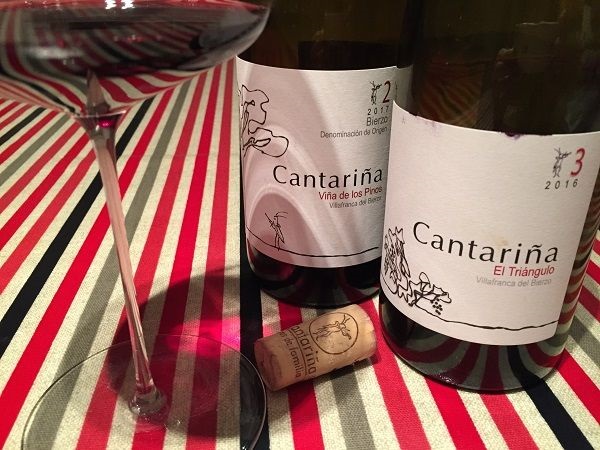 Cantariña No. 2 and No. 3 Mencia wines from Bierzo

In 2002, I first met Santiago Ysart Alvarez de Toledo – Santi Ysart – when we joined the full-time MBA programme at London Business School. Santi, a rugby-playing finance guy, rapidly became a stalwart of the LBS student community and a good friend. After graduating, Santi returned to Madrid and the world of banking and high finance for several years.

Finally, though, he had the cojones not just to get out of the rat-race, but to start a fine dining restaurant in Madrid – Alma or “Soul” – during which time he got more and more interested in wine. 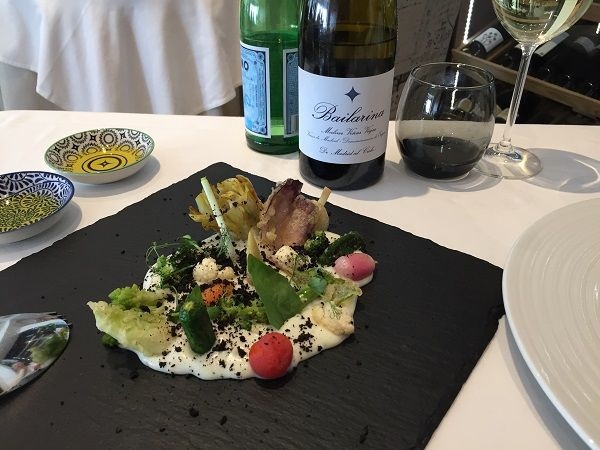 Just one of the ambitious, fine dining dishes at Alma

The restaurant, which we visited in 2016, sadly didn’t survive but Santi’s passion for wine did. With his 4 siblings, a plan began to form, to revive his maternal family’s wine roots. 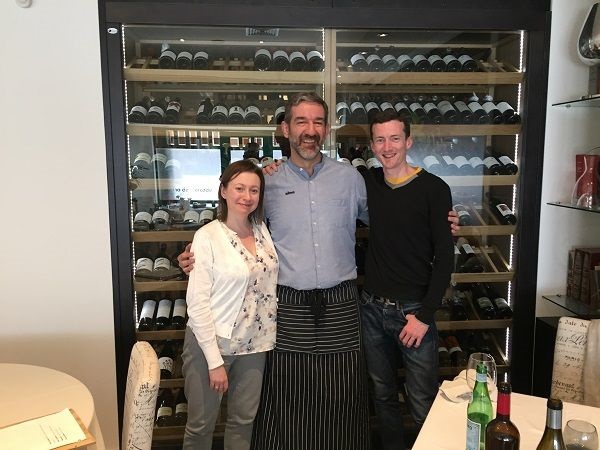 Santi, in front of Alma’s impressive wine cellar, when we visited

When Santi said he’d be in London in December and asked if I’d like to try the wines of his new family venture, Cantariña, I of course said yes and we met at 67 Pall Mall. This can be a tricky situation though, given our friendship: what if the wines are bad? How do I assess them objectively?

Thankfully I didn’t need to worry, because the two Mencía wines were very good – both the tiny production, but very fine, Cantariña No. 3 El Triángulo 2016, and their largest production Cantariña No. 2 Viña de los Pinos 2017, which I think is an absolute steal at €11 / bottle on the shelf, at least in Spain.

Later that evening, with the rest of the samples to hand, I showed both of these to a fellow MW I happened to bump into. Knowing only that these were from Spain she straightaway said of the No. 2 – “this smells very Mencía-like”, which was precisely how I felt – it’s a classic example of the variety. She also confirmed my view of the quality of No. 3. I’d like to see this wine again in 3-4 years, when I think it will be fully in its stride.

Moreover, the potential from the old vines that go into the white and Garnacha Tintorera bottlings is clear, and these should be great as Santi and his family build their knowledge of how best to handle these varieties in both the vineyard and winery. This is a very important point to bear in mind – the wines tasted here are essentially the first vintages made, so Santi and his brothers and sisters are still in the early stages of the learning curve.

Nevertheless, these are wines to watch – you heard it here first! I sincerely hope Santi will get UK distribution in the near future and I’ll do my best to point him in the right direction.

As for the name, Cantariña means “cricket” in the local Galician language, gallego. Their closest town is Vilafranca del Bierzo. Where the Camino to Santiago de Compostela passes through the town, there is another road named Cantariña after the local crickets found in that area. They decided to adopt the name to represent both the winery and its connection to nature.

Cantariña is Santi’s family project, which involves bringing family vineyards back into their own production and back to life. Today, Santi is based in Beirzo, and works full-time on all aspects of the wine business, with part-time contributions from his brothers and sisters – one sister, for example, designing their attractive labels.

For an ex-finance guy, something of the change of pace has taken some adjustment, as some decisions taken can take years to show an outcome, but overall he is loving the creation of something from their land, and tending it to be in good shape for the next generation.

Originally, Santi’s maternal grandfather, a noble landowner with 40Ha of land, first planted the vineyards. For the Bierzo region, where most production was either for personal consumption or bulk sales to co-ops or elsewhere, he was considered an innovator, helping to transform to own-bottled production across the 1950s to 1980s.

While technology to control fermentation and so on was lacking, leading to vintage variability in his wines, they were nevertheless well known for the region – indeed Alváro Palacios recently explained to Santi that he remembered drinking some when younger and that tasting them was part of what helped him realise that good wine could come from Bierzo.

As his grandfather aged – dying in 1982 – Santi’s parents’ generation tried to modernise the winery, for example replacing old foudres with epoxy-lined and stainless-steel tanks. Sadly, to do so they mortgaged most of the land and got over-leveraged, ultimately going bankrupt in the late 1990s. However, at his grandfather’s insistence, the 2 best vineyards, 3Ha Viña de los Pinos and 3.5Ha Valdeobispo, were not mortgaged so remained in family ownership.

Another winemaking business leased those vineyards and made wine over the intervening period. However, in 2014, the family realised that a small part of one vineyard was actually planted with Alicante Bouschet not Mencía, and that the leasees were not interested in harvesting it.

After discussing with the leasees, the family took care of that 0.2Ha parcel from the 2015 vintage – ultimately making their first wine – 900 bottles of Cantariña No. 1. As they embarked on the project, they quickly realised they didn’t know enough about winemaking, so asked Alejandro Luna Beberida for help, and the wine turned out well-enough for them to be encouraged.

That success suggested it was worth expanding, so they took over working an equally-small, triangular plot of Mencía within Los Pinos, named El Triángulo, which yielded 500 bottles in the 2016 harvest. The vines are approximately 80-100 years old, and as was typical practice for the area at the time higher up on the slope, some white vines – Doña Blanca and later some Palomino – were planted. In El Triángulo, that’s around 5% of production and up to 10% across in the entirety of Viña de los Pinos.

In 2016, the winery who had been renting decided to give up the contract and focus on vineyards closer to their base. The Cantariña team then took the lease over for the entire pair of vineyards – 3.5Ha and 3Ha in total. Scaling-up significantly in 2017, production upped almost 10-fold, to 12,000 bottles, primarily from the full 3Ha of Viña de los Pinos. Soils are clay and limestone at 5-600m altitude on hills, with some sand in parcels like El Triángulo.

In 2017 they sold 7,000kg of Mencía to leading light of Bierzo, Raúl Perez. In a style typical of the man, he said that the grapes were of such quality that they should make their own wines from those vines in 2018, which the family intend to do. Further, a new plot, which had been abandoned, has been planted with Godello and with Merenzao (Trousseau), to expand the white wine range on the one hand, and to add a grape that Santi and the team like on the other.

Their viticultural philosophy is sustainability with as low intervention as possible, with that low-intervention approach extending to winemaking. But low-intervention doesn’t mean “no sulfites” or “natural”; there’s a pragmatism here and a recognition that commercial viability through wine stability is critical to their establishment. The well-trained businessman in Santi quite rightly makes its stamp on the set-up of Cantariña.

We began by tasting their white wine Cantariña No. 4 Doña Blanca, first made in 2017. It is 80% Doña Blanca which is a variety typically overlooked in the region – sold to co-ops, blended-in elsewhere, or simply not even harvested. They therefore didn’t know what to expect from it, so in 2017, the white vines were deliberately harvested a little later – after the Mencía, in fact.

This was done to see what effect fuller maturity would have on the varietal expressions of both Doña Blanca and generally-neutral Palomino. Given broadly decent acidities resulting from their altitude, they felt it was a risk worth taking, and the 2017 No. 4 weighs in at 14% ABV. For 2018, they deliberately brought the grapes in with a slightly lower 13.5% ABV to get a little more acidity and less ripeness.

Tasting the wine, I think that’s the right approach, as I believe a little more freshness