The landmark Ysios bodega outside Laguardia

I’d had a recommendation from one of the folks at Wines of Rioja to visit Ysios since it is close to Laguardia where we were staying, if nothing else for the space-age architecture of its modern winery. So, with Madeleine, we organised a morning visit without any particular expectations beyond maybe solid, modern-style Rioja. What we encountered was vastly more interesting than that. 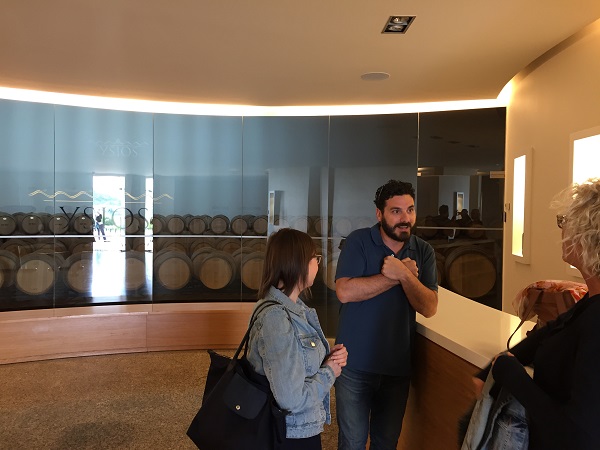 We were met by Roberto Vicente, who gave a little background to the estate and winery, then took us out into some of the vineyards he’s most excited by, followed by a barrel tasting of some of these single vineyard plots back at the winery, plus a couple of bottled wines.

This served to paint a clear and striking picture: this winery is right on the cusp of a major and exciting change – from solid, modern Reserva wines to ‘new wave’, single vineyard expressions. And from the barrels we tasted, watch out for them!

The bodega was owned by a Spanish bank between 1999 and 2001, with the new, architecturally-impressive winery inaugurated in 2001. It was then bought by Allied Domecq as was, before that itself was absorbed into current owners, Pernod Ricard. It now sits in Pernod Ricard Bodegas, alongside the far larger Campo Viejo brand.

Campo Viejo, as Priority Brand, gets the lion’s share of attention, and indeed Pernod Ricard have apparently been looking to sell Ysios for years. Perhaps for these two reasons, Roberto has been given a very free rein from head office and the accountants, thereby enabling him to guide a relatively radical change. I hope very much that this works.

The winery was set up to be an ‘only Reserva’ producer. As Pernod US’s website puts it, Ysios is a “winery focusing on premium Reserva wine in a modern fruit forward Rioja style” using “ultra premium, estate-grown, 100% Tempranillo from 25-to-30-year-old vines in the prestigious Rioja Alavesa region”. This is almost the essence of the ‘modern’ Rioja style and is true right now, for their current release Reserva 2012. As such it was designed to be a 1,000,000 bottle a year facility.

After the 2012 vintage it will all change as Roberto moves to allowing the vineyards to express themselves, labelled with the ‘green’ Rioja generic back label rather than Reserva, and changing the barrel ageing periods accordingly, as well as reducing new oak. This, in turn, is the essence of ‘new wave’ Riojas. He sees this as a 100,000 bottle a year brand. Ironically, this is far more in line with Pernod US’s above description, which actually begins: “Boutique, artisan winery…”. I sincerely hope that the economics can be made to work, by operating at 10% capacity utilisation. 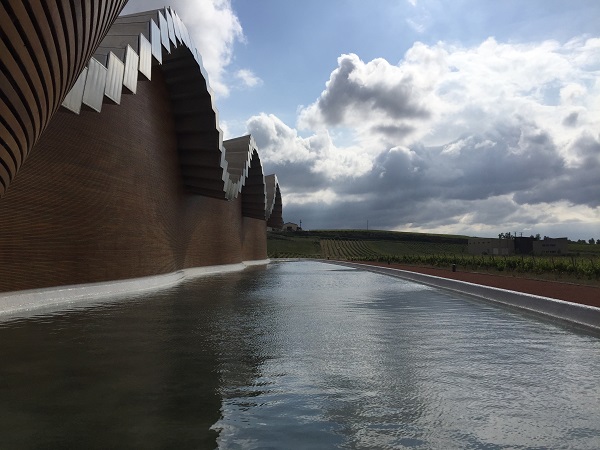 The winery’s design is supposed to reflect the shape of a row of barrels. But for us, given the water outside and wavy walls, it seemed to be a more aqueous structure. What was remarkable though, was the surprising degree of sympathy the shape showed against the backdrop of the Sierra de Cantabria – a far better ‘fit’ with its surroundings than Marqués de Riscal’s Frank Gehry-designed luxury hotel. 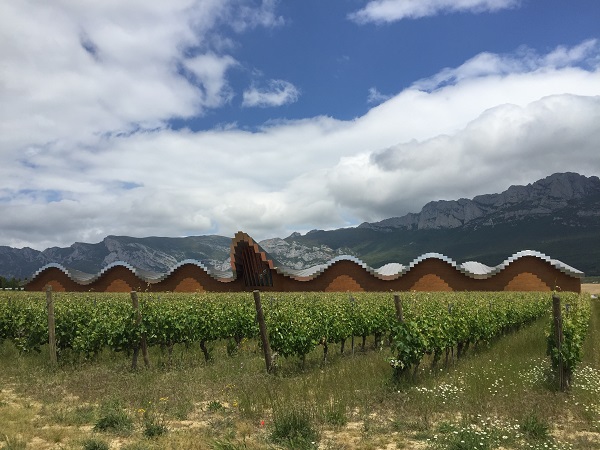 The modern bodega design is surprisingly sympathetic to its environment

Ysios own 7Ha of vineyards, but control 50Ha in total, through contracts with local vineyard owners. In general, though their red vines are Tempranillo, where their vineyards have slopes, Viura was typically planted at the top of the slope to control its natural vigour. Originally, Viura vines were planted – or in some cases interplanted – to provide acidity to the red wines. 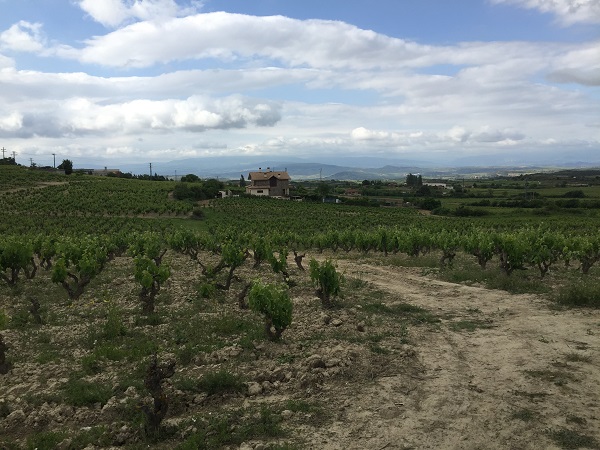 Most vines are planted as bush vines. Roberto is, in fact, gradually converting those which are currently trellised to bush vines, more as a matter of belief in letting the vine grow as it ‘wishes’ than to force it in certain directions, versus having a specific viticultural outcome in mind. He drew a parallel with the teaching philosophies of Montessori school, where his kids are currently enrolled, as ‘allowing the vine to grow up in its own way’ just as Montessori uses a less directed learning method.

For all Pernod’s “25-30 year old vines”, Ysios have some that are considerably older. There is an old block by the winery, planted in the 1950s for example. We visited 3 further vineyards:

It is these old vineyards that give Roberto the backbone for single-vineyard expressions. They have 7 plots including separately-harvested Viura, but will release only 2 to begin with in 2015. From 2017 onwards, the Single Vineyard designation will be applied. 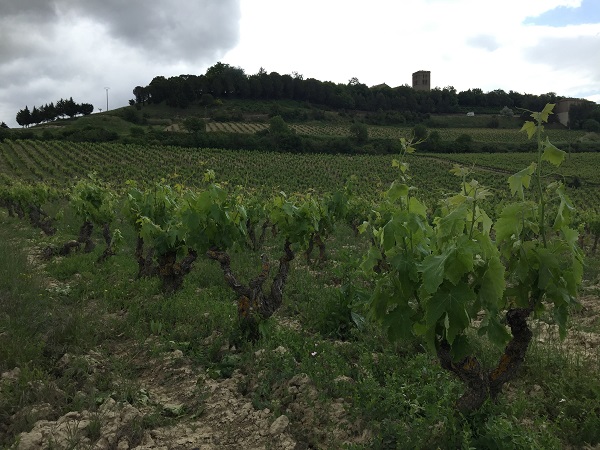 In Huerta Vieja, the vineyard was originally planted with rootstocks, then a field-blend of local Tempranillo canes were field-grafted to establish the vineyard. The upper slope has a block of Viura. 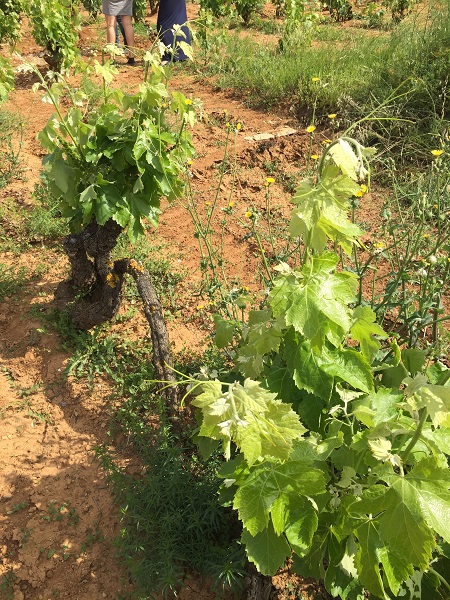 In Valcabadda, the sandiness of soils has allowed for vine propagation onto its own roots using layering. This was done as the shallow, 30cm soils over an impenetrable subsoil, mean the roots of surrounding plants spread laterally and block conventional replanting. 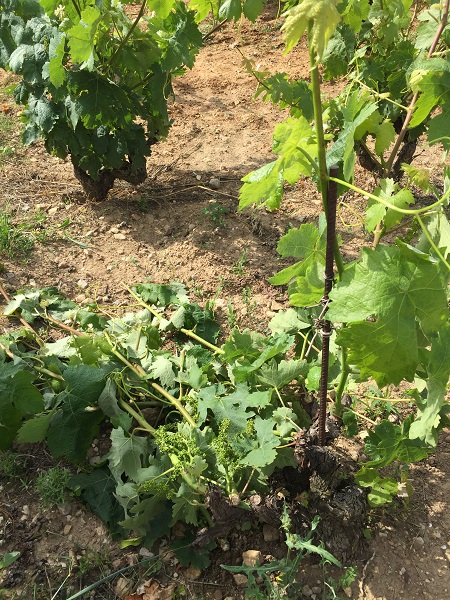 We also saw clear evidence of recent strong winds here, that had literally snapped young canes not yet strong enough to resist the wind. Roberto’s only solution is to ‘tip’ the shoots to reduce any pendulum effects that accentuate the wind impact. 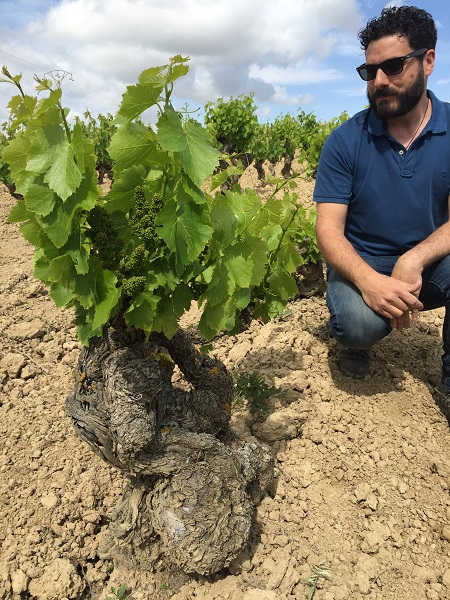 Roberto with a centenarian Garnacha vine is Las Naves

In 130 year-old Las Naves, we were introduced to the centenarian Garnacha vines that are particularly close to Roberto’s heart. This is a field blend, so these sit close to equally elderly Tempranillo. 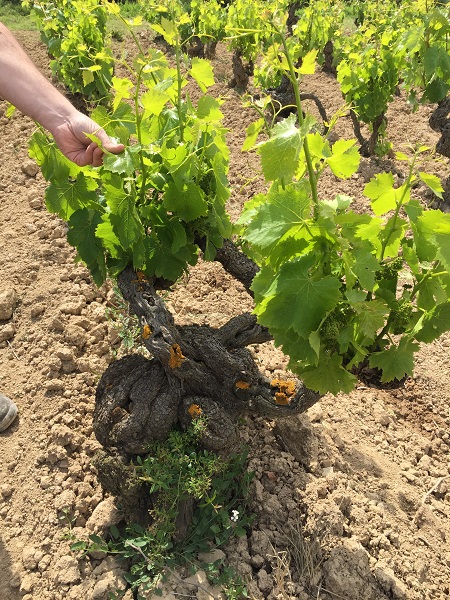 Here, along with other blocks, horses are increasingly being employed to reduce compaction during tilling and other vineyard processes. 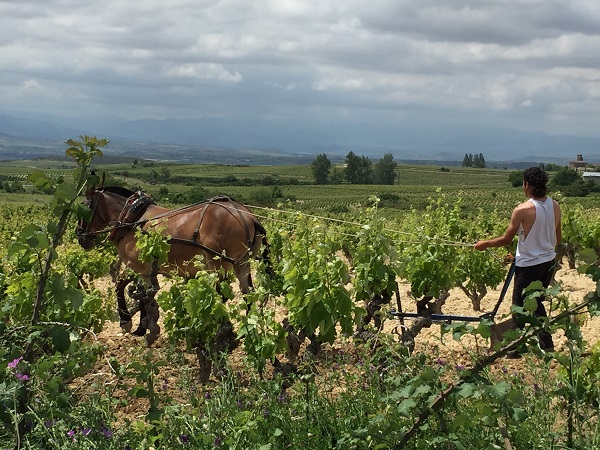 Ysios’s horse working a vineyard close to the winery

These blocks are harvested with minimal intervention, as part of Roberto’s intent to allow the vineyards to express themselves.

Discussing 2017, Roberto explained that frost had been less of an issue for Ysios; more significant was drought due to hot weather in the ensuing months. In the home vineyard block, yields were down to 1.7t / Ha vs. typical 4t / Ha.

En route back to the winery, we diverted to see this super-peaceful, ancient, druidic or equivalent ‘dolmen’ site, often overlooked by tourists. 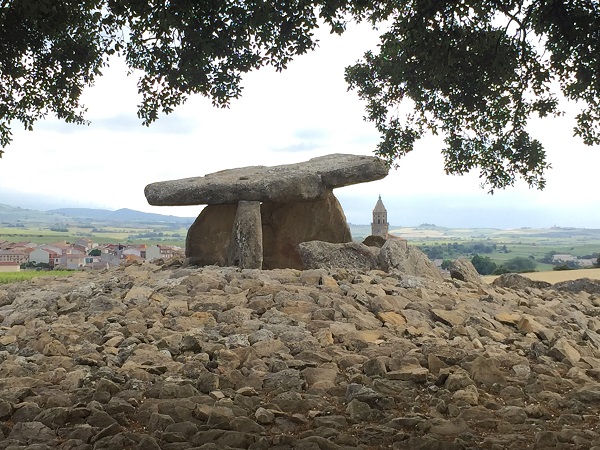 The dolmen of Elvillar – “the witches hut”

The winery is laid out to operate linearly from Westerly grape reception, through fermentation, to maturation towards the Eastern end of the winery. 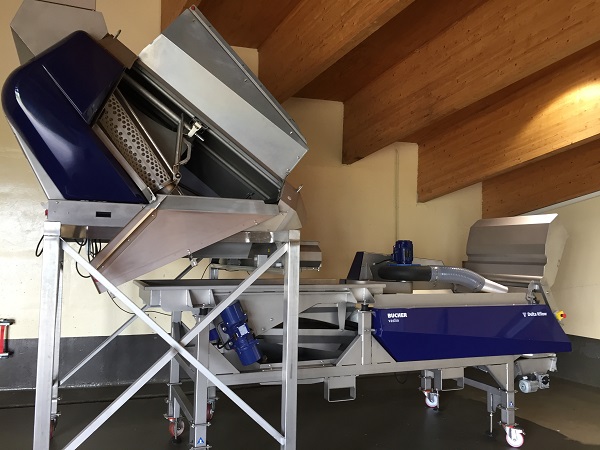 At the outdoor but covered grape reception, they have just added a new, high-end destemmer which shakes off whole berries rather than knocking them off and damaging them. This should enable them to make their Grano a Grano bottling (from Valcabadda vineyard fruit) without the laborious hand-destemming done to-date. The destemmer also has an air blast system at the end to blow out any MOG, leaving just the berries. 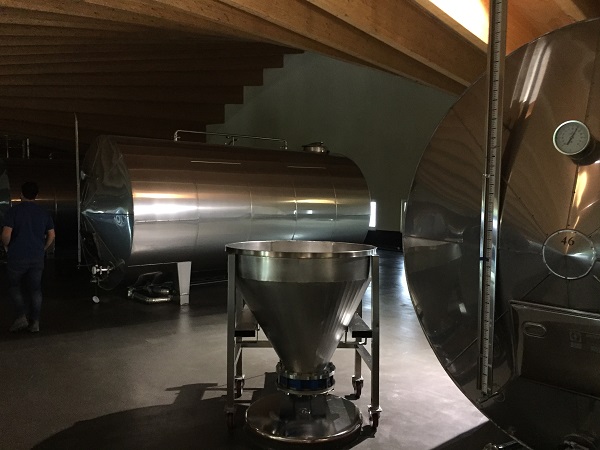 Horizontal fermenters were originally installed but not used. The gravity-feed hoppers are, however

For fermentation, the winery was originally kitted out with many horizontal fermenters. These are not now used as they don’t fit with Roberto’s quality ambitions. Instead, he uses open, tronconic, stainless steel vats. Interestingly, he can fill these with a range of volumes of grapes without oxidation problems, by virtue of using CO2 / air to break up the cap rather than punchdowns.

The technique, which learned in New Zealand, means gas is bubbled up from the bottom of the tank, causing cap-churn without driving in too much oxygen. He then monitors dissolved O2 levels in both must and wine, throughout the winemaking process. This gentle extraction is intended to deliver silky tannins in the finished wine. 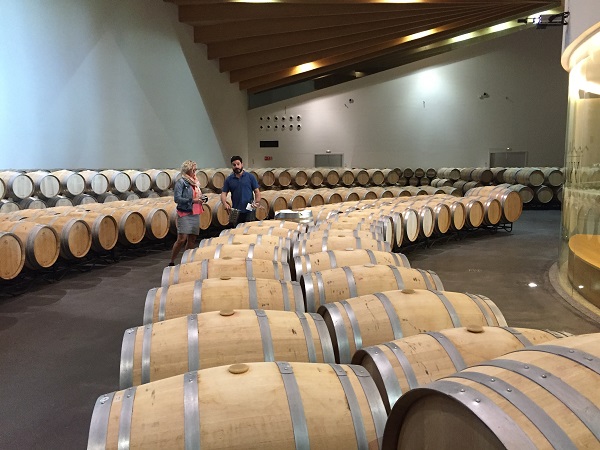 In maturation, perhaps the biggest changes are underway. Roberto has stopped buying new oak barriques – for a while at least. He is now building a stock of 500L barrels and a 2,000L foudre intended for maturation of the pre-Phylloxera, Las Naves block. We tasted Las Naves 2016 from a 300L and a 500L barrel (he also has a 400L as part of the experiment he’s running). The 500L was distinctly superior in quality and balance – and was a very fine wine in its own right!

Roberto also has a Rioja Blanco in plan – primarily from their Viura vines, but likely with some other varieties included that are neutral but have acidity, such as Calagraño. He is looking again for vine expression rather than oak or winemaking, so wild yeast fermentation, used 500L barrels and eggs for fermentation and maturation, but with lees work to give richness and drinkability.