Contino were the first Rioja bodega to be set up in the mode of a Bordeaux château, with estate grapes from vineyards surrounding the bodega. From its establishment in 1973, Contino has been closely linked with Haro giants, CVNE – initially as a 50:50 joint venture, then wholly-owned by CVNE from 2013.

For many years, up to just after the 2017 harvest, the wines were made by Jesús de Madrazo, who built the reputation of the estate to one of the leading bodegas in Rioja. He has been succeeded by Jorge Navascues who, though he has big shoes to fill, has clear ideas for the directions he wants to take Contino’s wines.

This profile combines notes taken on my behalf by Ruth from a CVNE-Contino dinner at Planet of the Grapes in 2015, a second Planet of the Grapes dinner and tasting with Jesús that I went to in 2016, and finally our visit to the bodega for a discussion and structured tasting with Jorge the morning before the IMW Symposium began in 2018. The odd CVNE sister-brand wine were interlopers, but I’ve left them there to give context to the quality and style of Contino.

The rise to prominence under Jesús de Madrazo

It was Jesús’ father, then chief grape buyer from CVNE’s nearby Viña Real winery, who began the Contino story. Seeing that the Viña Real winemaker was repeatedly using the same plots for its Gran Reserva, went to see the vineyards on the North bank of a large bend of the River Ebro just west of Logroño, and found an old farm there. 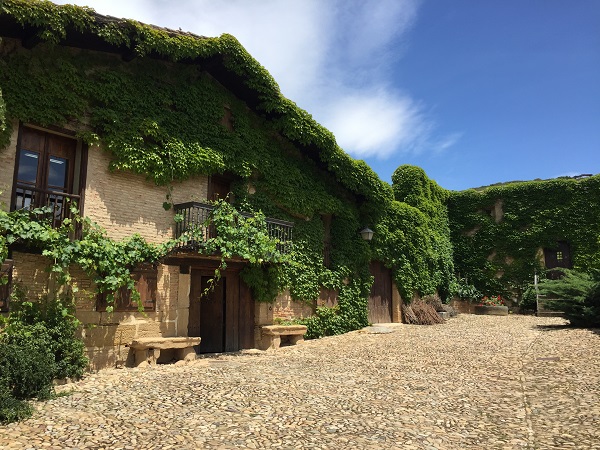 The courtyard of the Contino bodega, in the middle of the estate

This led to the creation of the estate, based on these original 10Ha, with the first harvest in 1974. The estate has since expanded to 62Ha under vine, with the wines made at the estate in its own bodega. The brand is held at arm’s length from CVNE to retain the ‘chateau’ identity and, unlike Viña Real or CVNE’s main Imperial and Cune brands, only estate grapes are used. 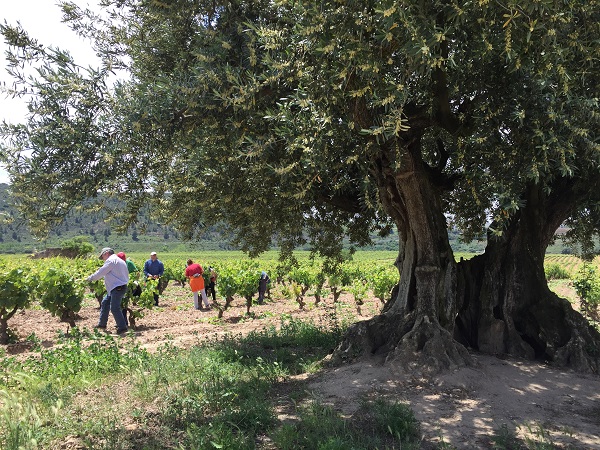 The first wine made was Contino Reserva which continues to be the principal commercial focus of the winery, at 90% of production. In 1995, a top-end wine was released from a single plot around a 6-700 year old olive tree near the bodega, Viña del Olivo, and that was followed by a Gran Reserva in 1996. 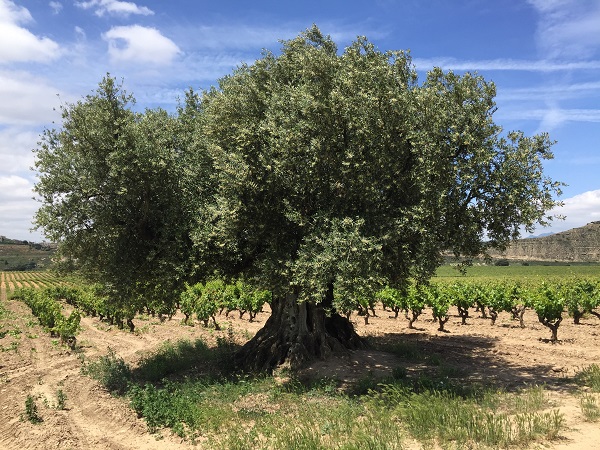 The olive tree after which Viña del Olivo vineyard is named

But more interesting to me was the addition in 1994 of a varietal Graciano Rioja – another first for Contino, which bodegas like Ijalba have since imitated. When done well, I’ve enjoyed varietal Graciano, though it does divide opinion – a little like Petit Verdot, which adds dark colour and blue fruit, acidity, structure and spicy ‘seasoning’ to Bordeaux, but is only bottled varietally by enthusiasts in warmer climates.

As with Petit Verdot, Graciano needs to be ripe to avoid austerity and fill-out its mid-palate. Jesús sees it as a cross between Petit Verdot, Cabernet Franc and Tannat in style, which needs galet roules-covered plots to give warmth and help achieve ripeness, thereby avoiding pyrazine character and softening its tannins. In Contino’s hands, in vintages like 2010, varietal Graciano very much works for me.

Contino have followed that with a varietal Garnacha, in a soft style that reflects the warmth of the Contino terroir. Its soils are 80% galets roules, deposited historically by the Ebro, with 20% calcareous clay, spread over 2 main terraces and 1 smaller. These stony, warming soils, coupled with dry-farming means harvests tend to be short, so 50 people are hired to get harvest completed in time.

Jesús was clear that ripeness was the one thing that Contino has plenty of and that the key is maintaining freshness. For that reason, their primarily-Viura Rioja Blanco does not undergo malolactic fermentation. Using massal selections, Viura planting has been expanded to support this wine. The varietal make-up includes around 10% Garnacha Blanca and 5% Malvasía.

In extending their varietal exploration, they planted Maturana Tinta. In 2016, Jesus had just 2 barrels of 2015, which was showing high pyrazine-like character so asked the ex-Ijalba winemaker who had experience of the variety for advice. New oak was recommended to remedy that, so Jesús used on Medium+ toast new French barrel and one older for maturation. The warmer 2016 vintage didn’t have such pronounced character, so only older oak was used for maturation. It remains to be seen whether Maturana Tinta will arrive on the market.

What the new era holds under Jorge Navascues

Jorge has inherited a great platform from Jesus and he is clear that wholesale change in style is not his intention, but rather tweaks and changes. Although, of course, Jorge has the right to make any changes he believes in and it will be interesting to see how styles develop in the coming years. 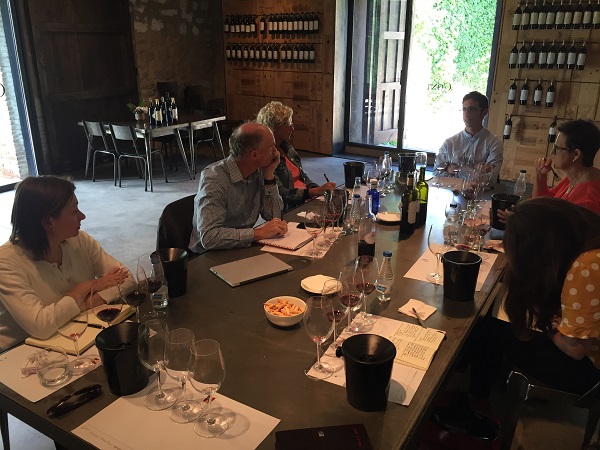 There were 2 principal areas that Jorge does have in mind for improvement, and these were the focus of the first 2 flights of a technical tasting that he prepared for us (we were also joined by key folks from his UK importer, Hatch Mansfield): 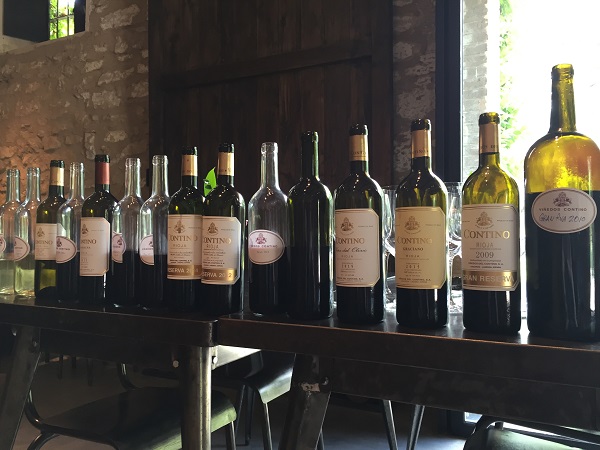 The wines we tasted were structured into themed flights by Jorge

The remaining flights looked at the key estate wine – the Reserva – which at 90% of production, Jorge believes is harder to make well than Viña del Olivo, then at Viña del Olivo itself, the varietal Graciano and finally their Gran Reservas including a sample of 2017. During these flights, we discussed other potential changes that may be seen in future.

These included likely harvesting Viña del Olivo 1-3 days earlier to manage ripeness and freshness, plus softer extraction and reduction in the proportion of new oak to under 100%. The plot naturally gets good ripeness, so can easily make a ‘big’ wine, and Jorge wants to retain some elegance and freshness. In addition, as the 2017 Mazuelos were surprisingly good, a varietal Mazuelo bottling may happen again in future, since this was last done in 2005.

Finally, organic certification may well be pursued because, whilst certifying the whole of CVNE’s 300Ha would be challenging, Contino is small enough to be able to manage it. Further, although the Ebro does bring summer humidity that can add disease pressure, it is generally manageable.

Discussing recent vintages, Jorge explained that 2017 was very good for the estate, hence putting wine aside for a Gran Reserva. This is because, although it is technically Rioja Alavesa, it is climatically more like Rioja Baja, meaning the April frost in Alta and Alavesa wasn’t a problem. Instead, harvest was the earliest in Contino history due to early bud-burst, meaning good acidity was retained during flavour development. Tempranillo picking began on 6th September.

2018 was proving challenging for disease pressure, as 500L of rain had fallen since January – equivalent to the entire year – and humidity has been very present during flowering, meaning sulfur and copper spraying against mildew. Whilst the late arrival of summer was forecast for the week after we were there, they expected to be watchful for mildew and botrytis throughout the growing season.

For me, what was evident from both the discussions and the tastings of 2017s made by Jorge was that this leading Rioja estate is in good hands, and we can expect it to go from strength to strength.

An interloper from the rest of the CVNE stable, served as an aperitif before Jesús’s tasting dinner in London, 2016. 100% Viura. Barrel fermented in 100% new American oak. Battonage 2 times / week.

Contino Rioja Rosado 2015 (16 / 20)
Sold all the 2015 before the labels were produced. Originally only 1 barrel for friends & visitors. Intended to make it 100% Graciano but that was far too dark to get a pale coloured wine, so now 63% Garnacha, 35% Graciano and 2% white grapes to get under the colour bar. 8 months maturation a 500L 2nd use barrels. 1 was sold in Norway, 1 in UK and the rest held in the winery.
A: Pale ruby – almost Pinot Noir-deep colour
N: Strawberry, cranberry, gentle nutty oak in background. Wild cherry
P: Strawberry, wild cherry, blueberry. Nutty mid-palate with some savouriness. Hint of saltiness

Wines with Jorge Navascues in 2018

Contino Rioja Blanco 2012 (?? / 20)
Ruth’s tasting notes. Unusual white Rioja. 85% Viura from 35-40 year old vines, 10% Garnacha Blanca from vines planted in 1970, and 5% Malvasia from vines planted in 1930. Grapes harvested selectively by hand in the vineyard, and then subject to table selection in the winery. Fermentation in large oak vats. No MLF as they believe it would reduce the finesse. Left on lees, which are stirred twice a week for 6-7 months, adding creaminess and structure. Then the wine goes into stainless steel tanks and is then bottled. Ageworthy. £28 / bottle. 2010 was the first vintage. Has won Decanter Best White Wine of Spain.
A: Pale lemon
N: Fresh citrus
P: Dry, high acidity, high ABV (14%). Creamy, with medium(+) intensity of flavours – fresh citrus, slight vanilla. Very elegant with integrated fruit flavours which balance the high acidity