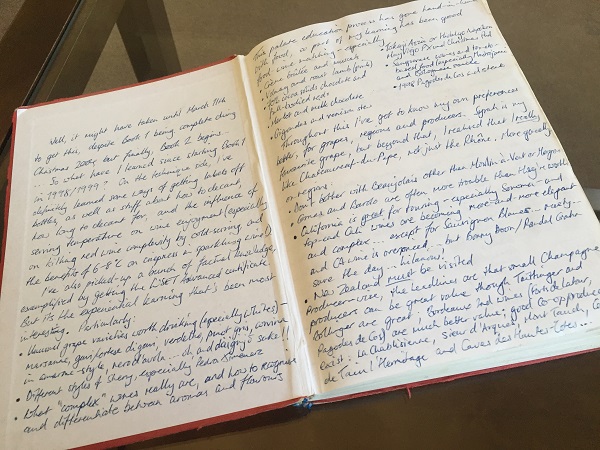 My summary thoughts as they were in early 2005, written inside Book 2

[Intro: As I began transcribing notes from Book 2, I remembered that I’d written notes on the inside pages of Book 2 when I started it, collecting together the state of my thoughts on wine, regions and producers at that point. It’s transcribed, unedited, below. As ever there are bits I still agree with and bits where my opinion has changed significantly. For example – partly with the general re-evaluation in the wider world that happened with the 2009 vintage – I would be far more embracing of Beaujolais, even if Morgon and Moulin-a-Vent remain favourites amongst the Crus. And writing this 4 days after visiting Barolo, I would certainly say something very different about the fantastic wines of that region! Anyway, a point in time snapshot from 12 years ago…]

Well, it might have taken until March 11th to get this, despite Book 1 being complete during Christmas 2004, but finally, Book 2 begins…

…So what have I learned since starting Book 1 in 1998 / 1999? On the technique side, I’ve definitely learned some ways of getting labels off bottles, as well as stuff about how to decant, how long to decant for, and the influence of serving temperature on wine enjoyment (especially on killing red wine complexity by cold-serving, and the benefits of 6-8C on crispness in sparkling wine!).

I’ve also picked up a bunch of factual knowledge, exemplified by getting the WSET Advanced certificate. But it’s the experiential learning that’s been most interesting. Particularly

This palate education process has gone hand-in-hand with food, so part of my learning has been good food-wine matching – especially:

Throughout this I’ve got to know my own preferences better, for grapes, regions and producers. Syrah is my favourite grape, but beyond that, I realised that I really like Châteauneuf-du-Pape, not just the Rhône. More generally on regions:

…Oh, and really expensive wines often lead to disappointment! But anyway, Daniel-Etienne Defaix is a very reliable Chablis producer… and on that note, my particular producer recommendations include: